Some Painted Ladies and a Busy Week

Tuesday evening we had to go to Newville to the pharmacy.  It was a beautiful summer evening so we took a drive along the Big Spring.  One thing that I always think defines southern PA in the early summer is the blooming of the Tiger Lillies.
They grow wild along the side of the road.... 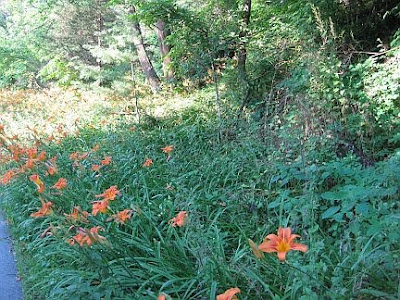 They are found in nicely landscaped gardens.... 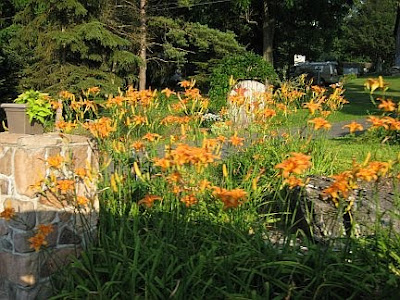 In front of the old mill along the spring.... 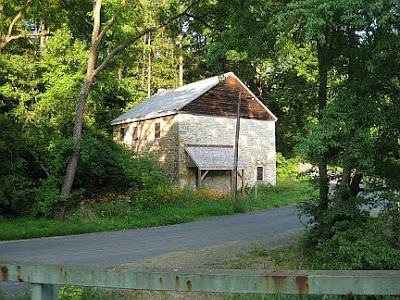 As we drove into Newville, I asked Zip to slow down so I could get some pictures of the houses.  Newville is a small town with a high percentage of lovely Victorian houses.
The fountain is the focal point in the center of town.  Every summer there is a festival to honor this lovely landmark. 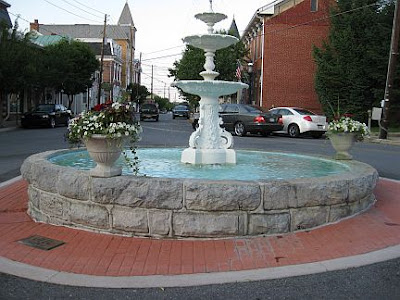 This large house is on the circle near the fountain. 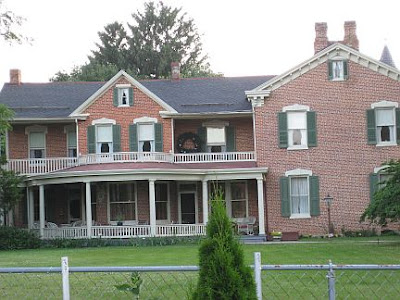 This is my favorite house in Newville.  I think it's called Heron Cottage.  I forgot to re-read the sign that tells the history. 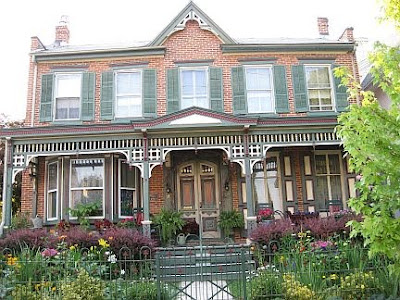 The rest are just a sampling of the many interesting houses. 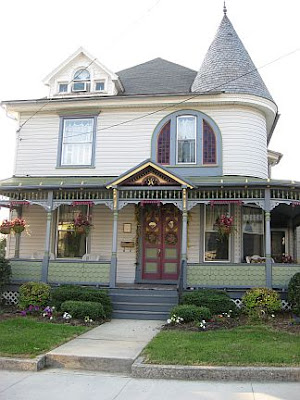 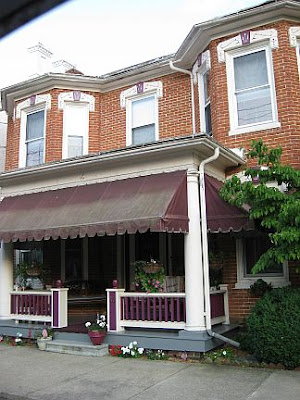 Some have the nicest decorations on their porches. 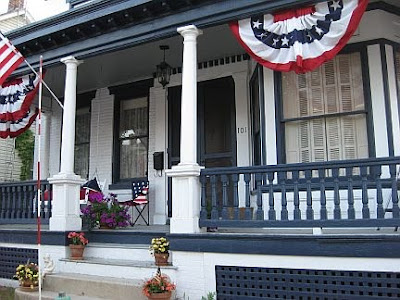 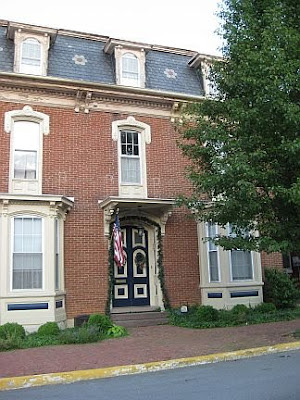 And that's the mini house tour of Newville.
On Sunday Willa, Chuck, Zip and I went to Hagerstown to eat at an Afghani restaurant.  We ended up going in the middle of the afternoon so we were the only people dining at that time.  The restaurant is called Laila's Kitchen.  It had a nice serene atmosphere.  I loved the black and white furniture with the lime green walls. 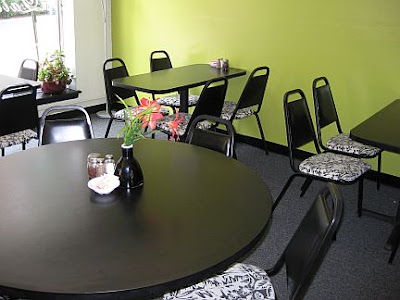 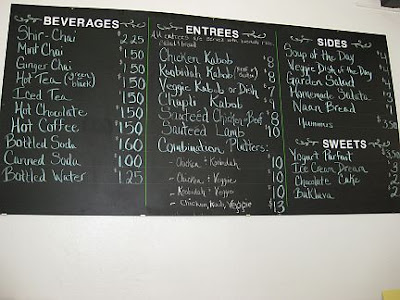 Our appetizer was hummus with pita wedges. 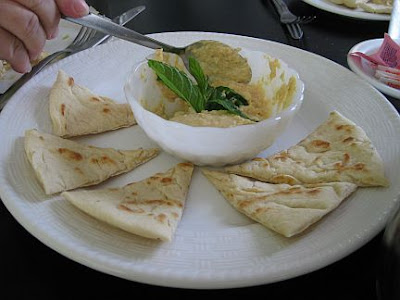 Zip and I had kabobs, both ground spicy beef and chicken.  They were served with rice with safron and naan. 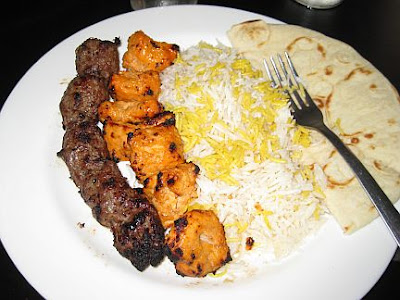 Chick had lamb stew and Willa had the spiced ground beef patties. 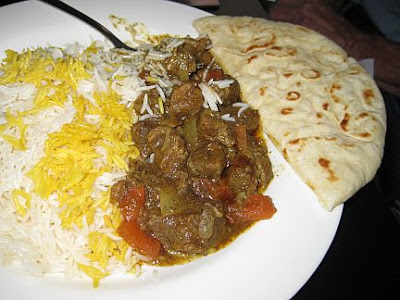 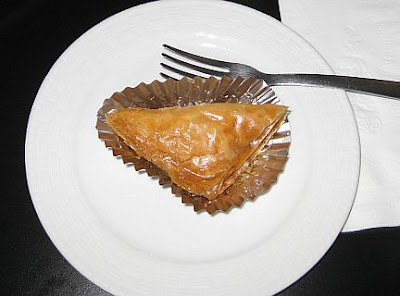 The food was delicious and very reasonably priced.  One thing that really impressed me was the water.  Yes, WATER!  It was a very hot day and they made the most refeshing water I've ever had.  It was in one of those large plastic drink dispensers with the ice in the bottom.  They had added lime slices and sprigs of mint to the container.  It not only tasted wonderful, it was also visually delightful.

The end of a lovely day. 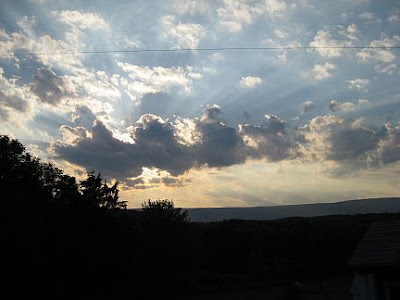 I have to post at least one kitty picture!  Penny has been back to the vet and had the FeLuke test.  It was NEGATIVE!  Horay!!!  So now she is out and about with the big cats.  Everyone seems to be tolerating each other fairly well.  There have been a few hisses, but what good is it to have a hisser if you don't get to use it once in a while!
Pestering Deiter.... 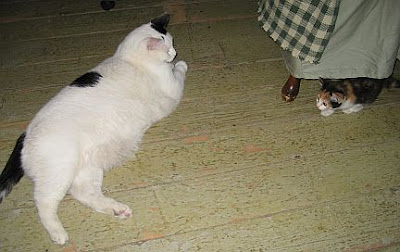 Zip is trying to hold her still so I can get a good picture. 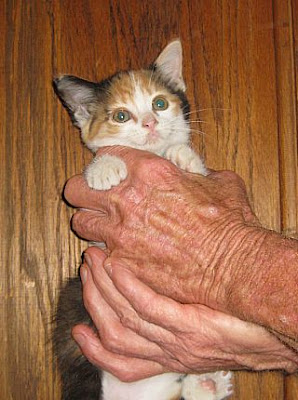 Meanwhile Tipper needs reassurance that she is still Mommy's Number One Girl!  She's been a little 'clingy' since the baby is here. 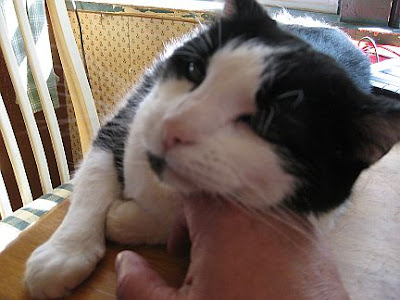 I have been doing some hooking but nothing I can show right now.
I can't think of anything I'd rather do while sitting in front of the fan trying to keep cool!
Posted by weaverpat at 11:26 PM