Waaah!
Where did the summer go?
I must say I loved this summer with only one week when the temperatures were in the 90's.  Mostly it has been pleasantly warm and sunny with a nice breeze blowing.  There were a few much-needed rainy days.  I can't remember a more enjoyable summer since I don't know when.

We've been busy painting in the addition.  WOW!  Brad and Kami have been life savers.  They are so good with the brushes and rollers that the basic wall and ceiling painting only took two day.

Brad is the king of the roller derby. 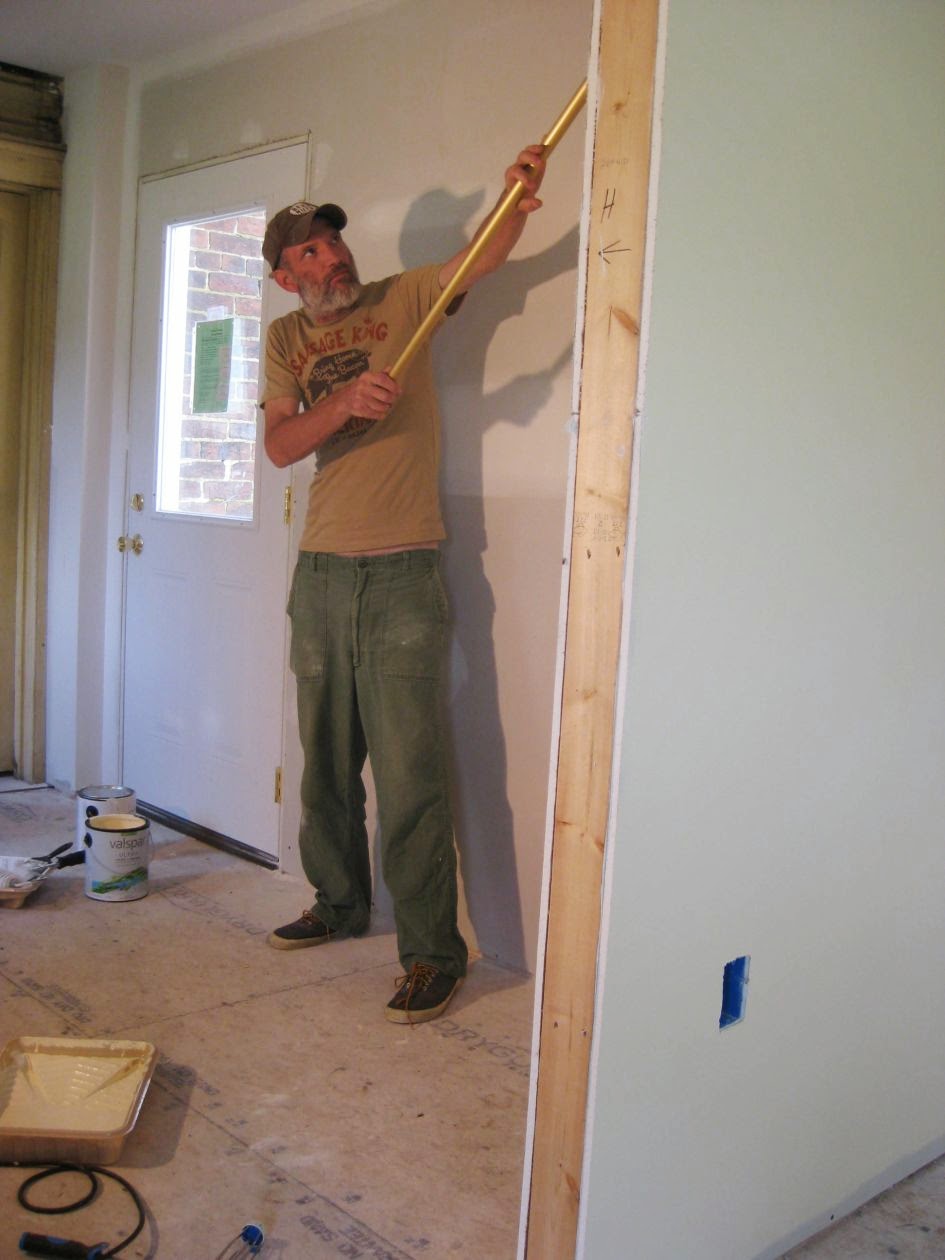 Kami did all the trim work around the ceiling. 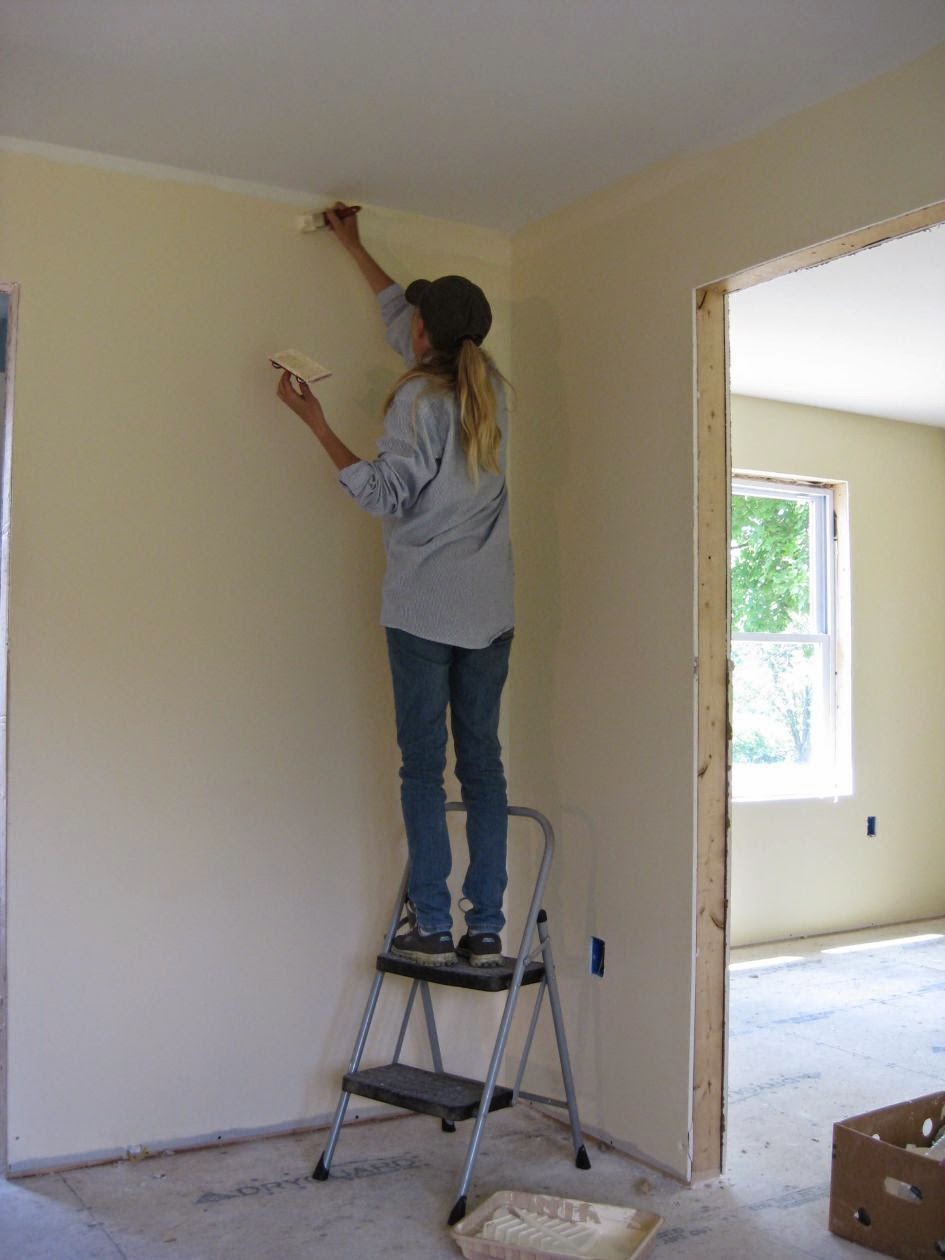 Zip is revving up the reciprocating saw.
There are no pictures of me because I'm sitting on the sidelines supervising the action.
Well, not really.  I did do a little bit of the rollering but I just don't have the strength that I used to. 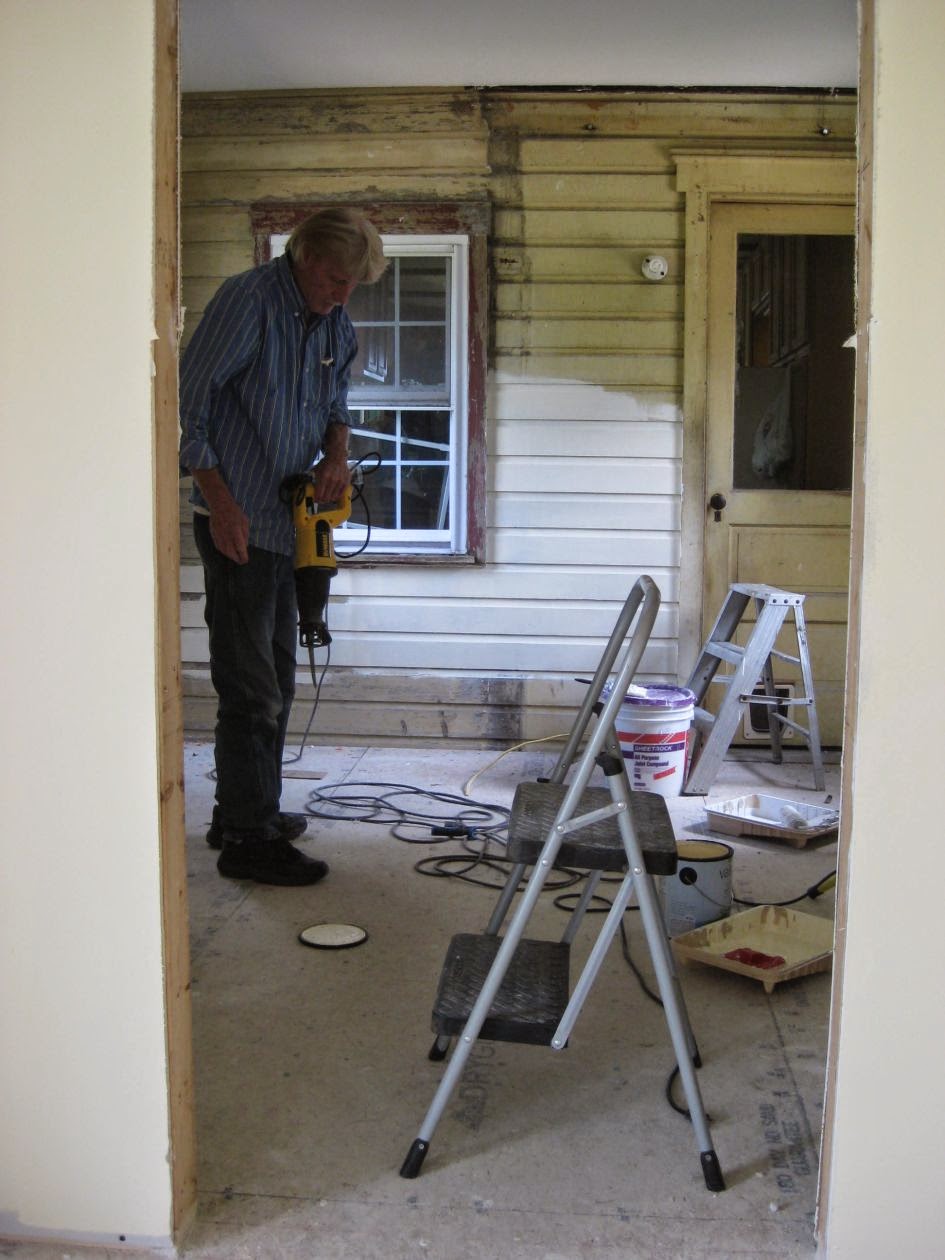 The job is finished! 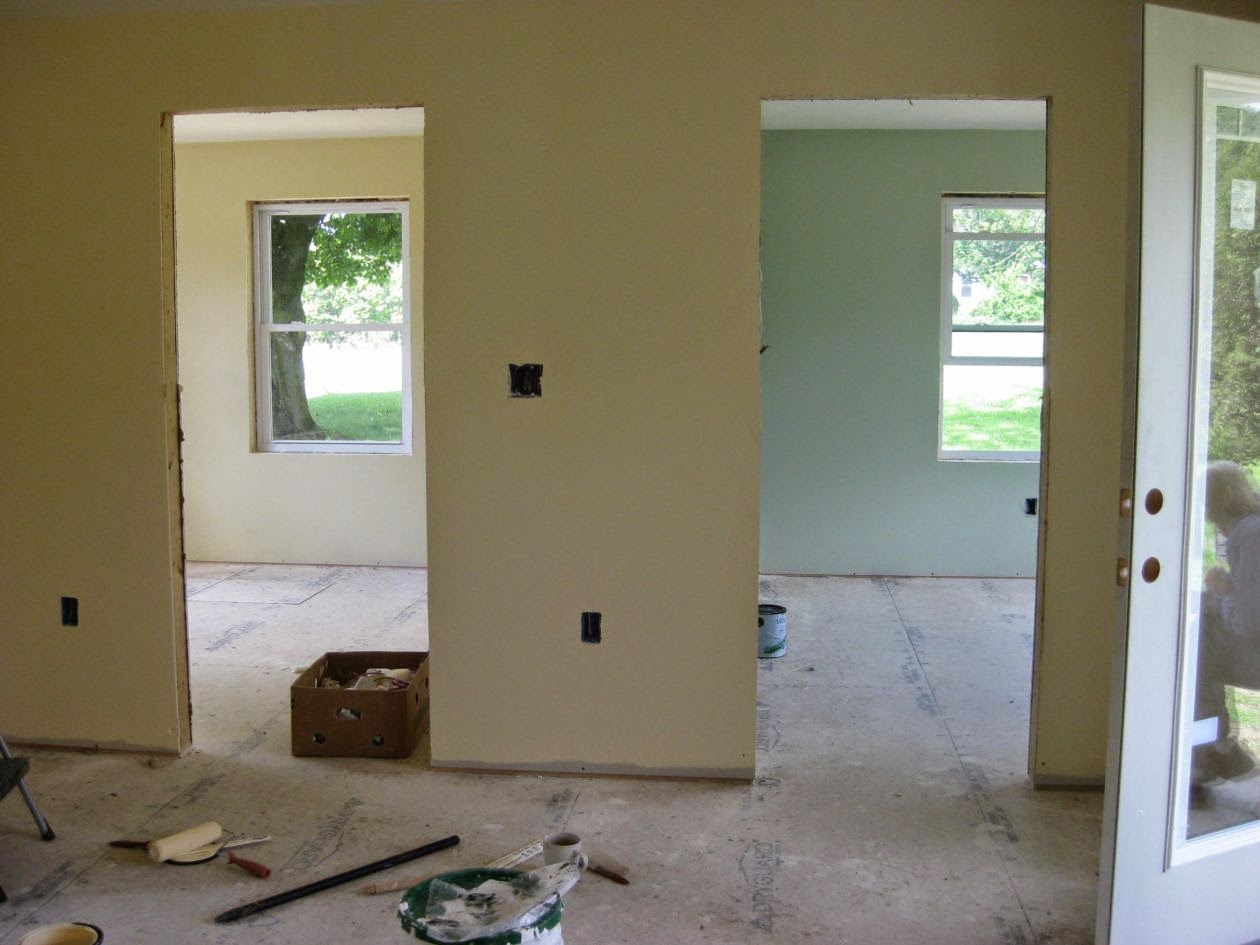 The colors look brighter than the picture.

This week the crew came and put the trim around the windows and doors, put locks on the French doors and installed the chimney for the wood stove in case we decide to install one.  No pictures of that yet.

Next either the flooring or the electric will be installed.  Then all that's left is the plumbing.

When we took a lunch break during the painting, we discovered this guy taking a stroll through the yard.  First turtle I've seen in our yard in several years. 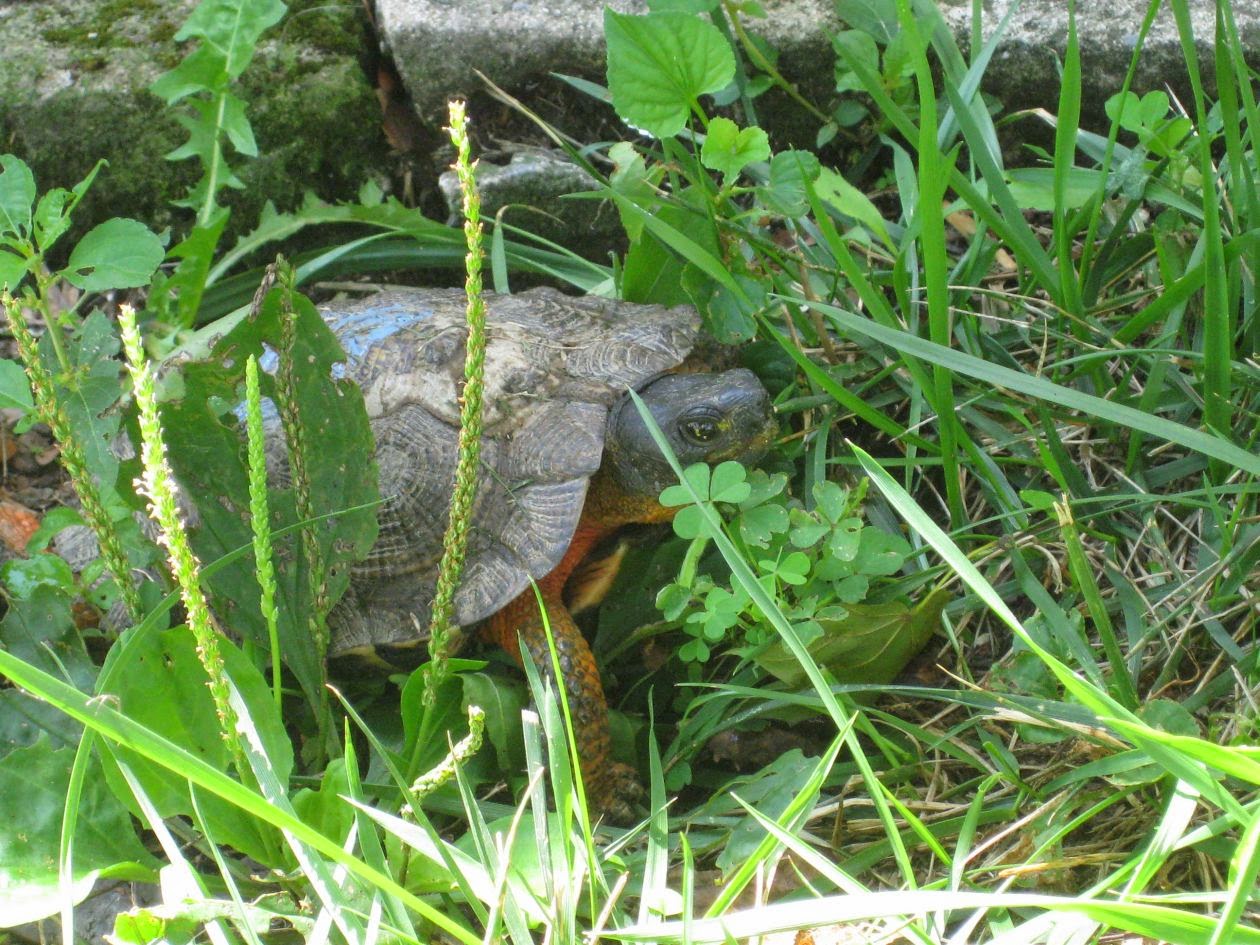 This past weekend I noticed that little Miss Penny was in the catbox a lot more than normal.  I keep little styrofoam bowls handy in the bathroom so that I can take kitty urine samples when necessary.  Sure enough, she was peeing pink.  We called the vet and they were able to see her right away.  She has a recurring bladder problem when she gets stressed.  She didn't seem upset by the roadwork by our house and the work crews in the addition, but it must have affected her more than we realized. 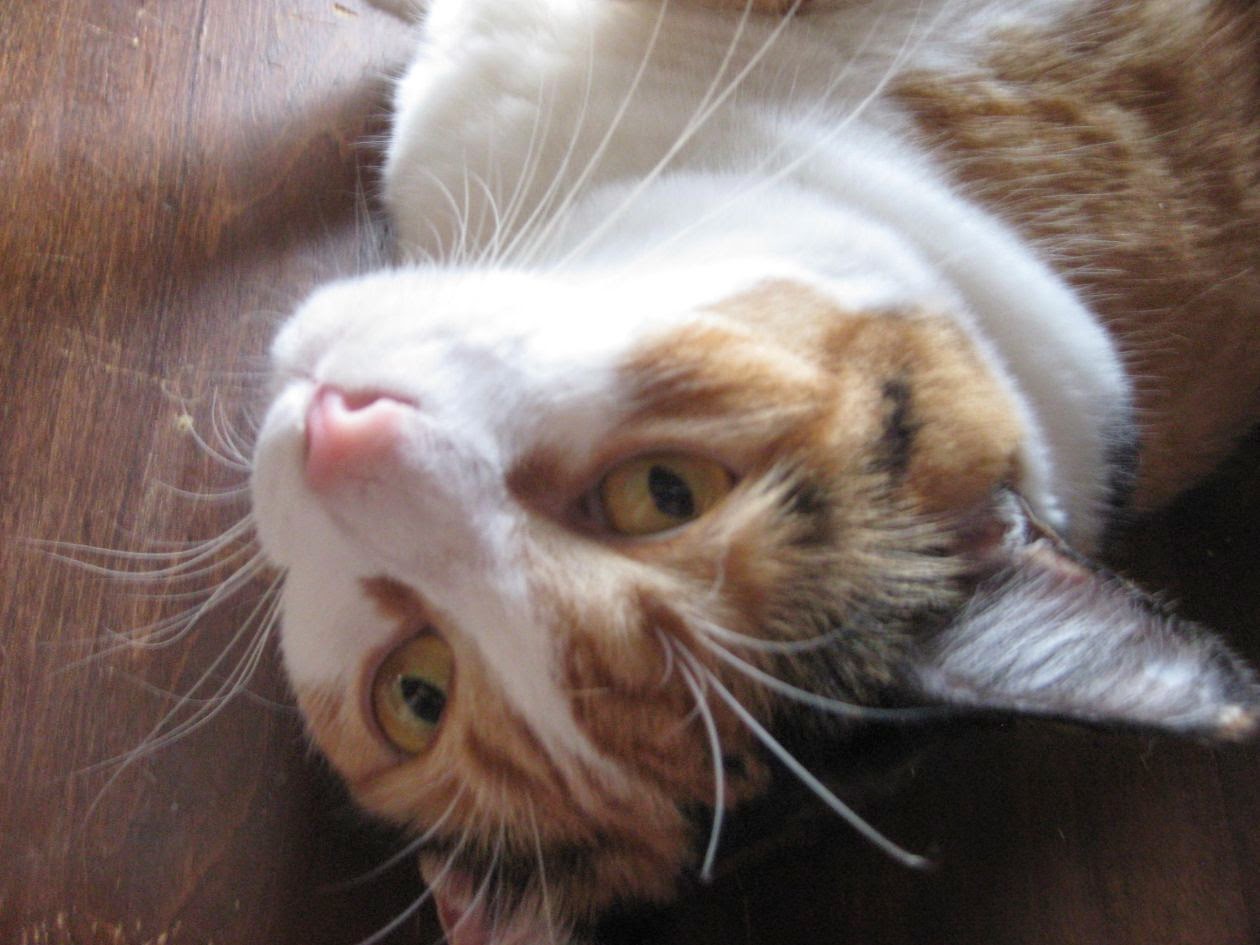 When we got there the vet tech came out with a towel and put it over the cat carrier.  They are using 'comfort towels' to lower the stress levels of cats who come in for an exam.

It was pretty amazing!  She isn't a spazz or anything, but she does like to wander around the exam room and climb up on the shelving and hide.  This time we got her out of the carrier and put her on the towel and she lay there and purred.  She was relaxed and very cooperative all through the exam.  I was relaxed and happy too, even when I saw the bill!   It isn't supposed to work on humans, but I wonder...

The stuff they spray on the towel is called Feliway.  It mimics the pheromone that cats use to mark their favorite things.  You  who have cats know how they rub the side of their faces against things.  When they do that, they are leaving this certain scent that tells them that this is a good place or thing. 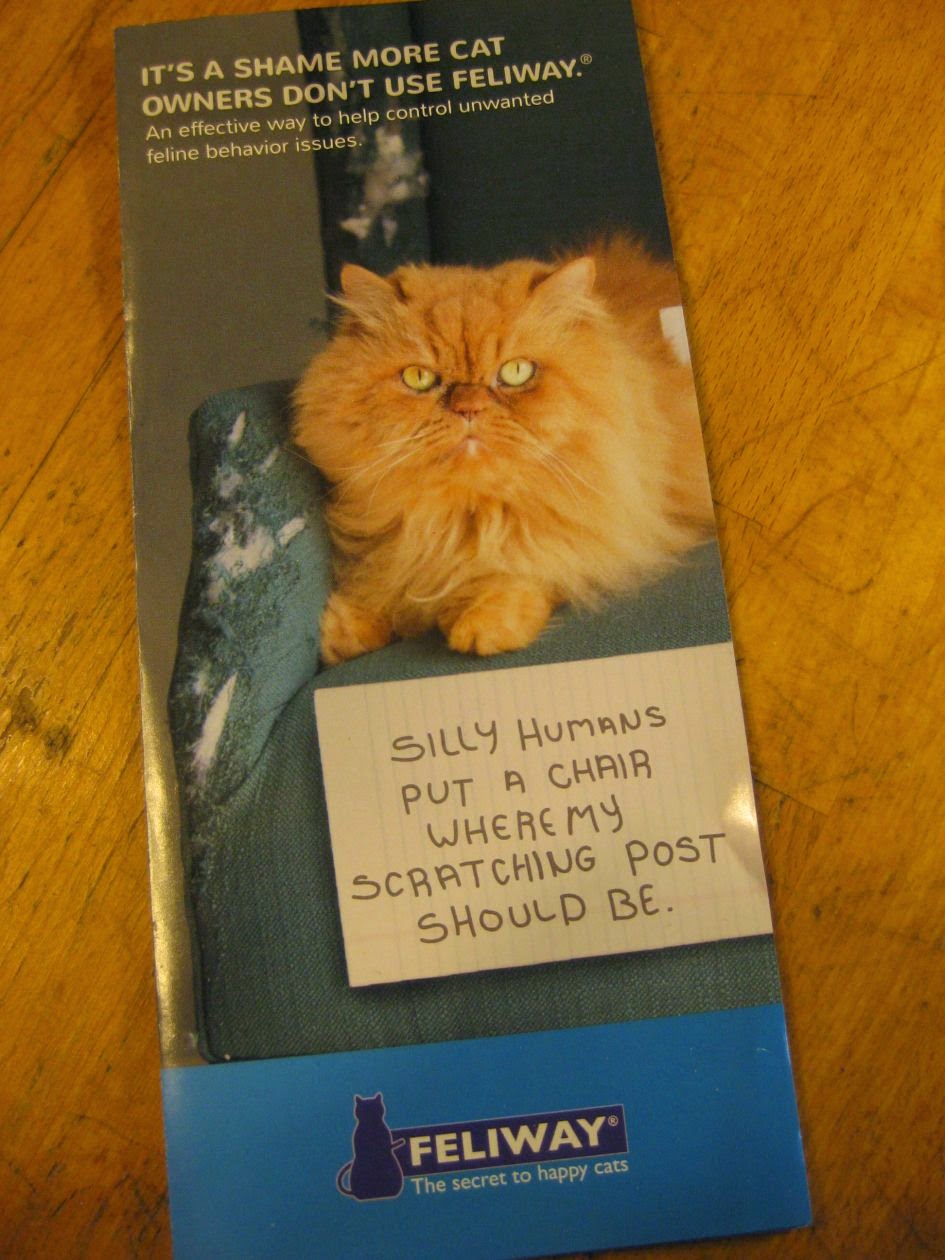 The brochure claims that Feliway will help reduce inappropriate scratching and spraying and helps reduce stress.  I don't know about the first two, but is sure did calm Penny while at the vets.

I bought a bottle for myself and Kami.  She used it on Ernie recently when an inspector came to their house to make an assessment in preparation for selling their place.  Ernie who usually races off to a hiding place as soon as someone comes to the door, remained laying on his 'comfort towel' right there in the living room. 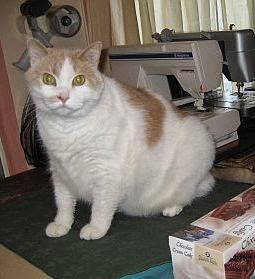 We may have to buy this stuff by the gallon when they move here.

One last kitty thing.  A friend emailed this to me yesterday.
Was she trying to tell me something??? 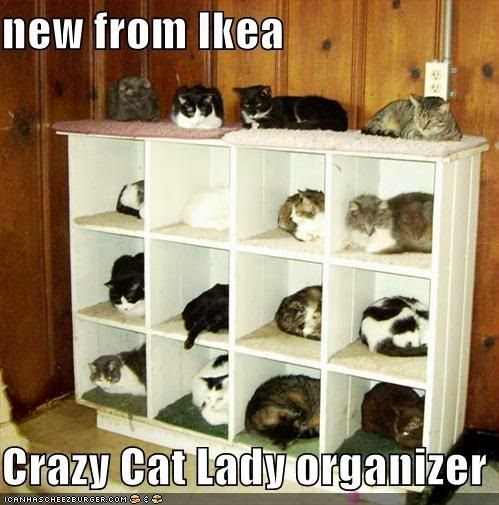