Waaaah!
The end of September already!
When I woke up this morning at 6:30 it was still pitch dark outside.  I hate getting up in the morning when it's dark outside!

It's been a busy month starting with a cookout at Brad and Kami's the weekend after Labor Day.  It was a gray day, but we had a nice time relaxing and eating in their screen porch.  Right outside the door is their lovely little pond. 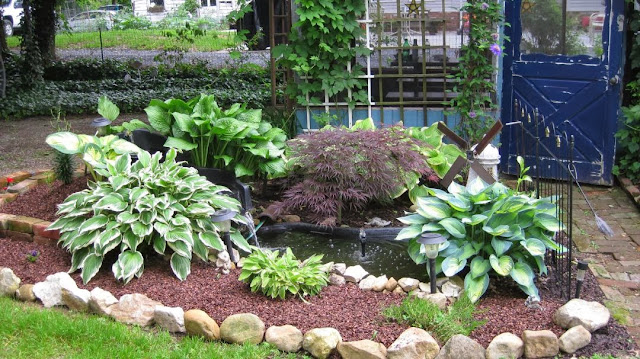 On the other side of the brick path is a fountain made from an old Gem cistern pump and a half whiskey barrel. 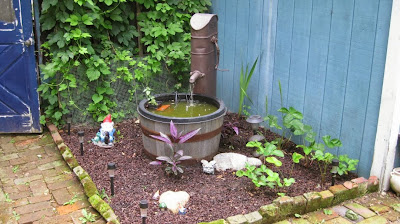 Inside the food was delicious.  I am not usually a lover of ribs, too much fat and bone for my taste.  But Brad made the best beef ribs I've ever eaten.  He has his secret recipe that he will not share with me!  Mostly because he doesn't remember what he puts in the marinade and sauce from one time to the next.  Like me, he is an 'experimental' cook.  We had several salads and fruit from the grocery store and an assortment of cheesecake for dessert. 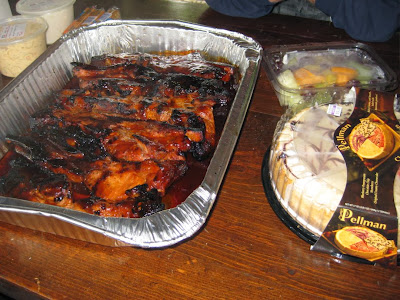 After dinner we sat around and talked.  Brad and Dad (Zip) are bonding! 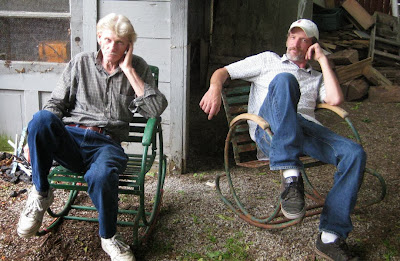 Speaking of bonding, Isabell loves to lay close to Deiter and have him wash her ears.  She has wanted to be friends with him since the first week she came to live with us when she was a little kitten.  At that time he didn't want anything to do with a tiny girl kitty.  As they grew older he became more tolerant and not they are great friends. 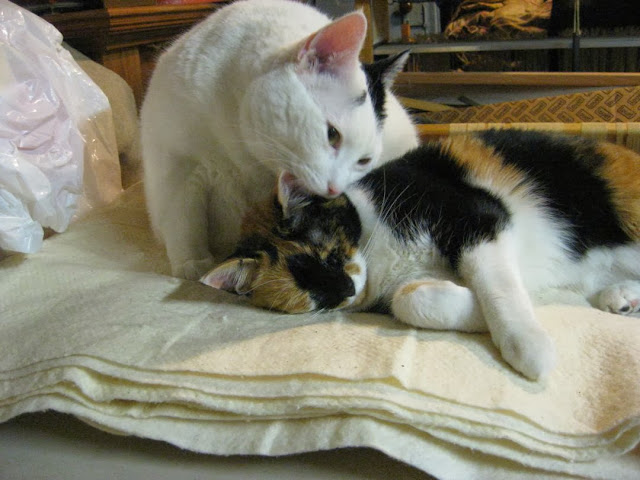 She will find him where he is sleeping and approach very slowly and respectfully and wait for him to acknowledge he before she lays down with him.  Then they share a nap. 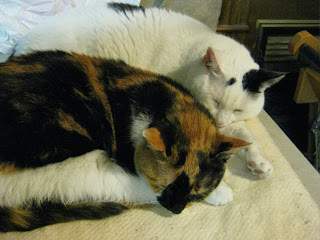 Recently we drove to Biglerville to Hollabaugh Brother's Orchards.  The have such a nice store full of wonderful fruit and produce.  Their fall displays make it so inviting. 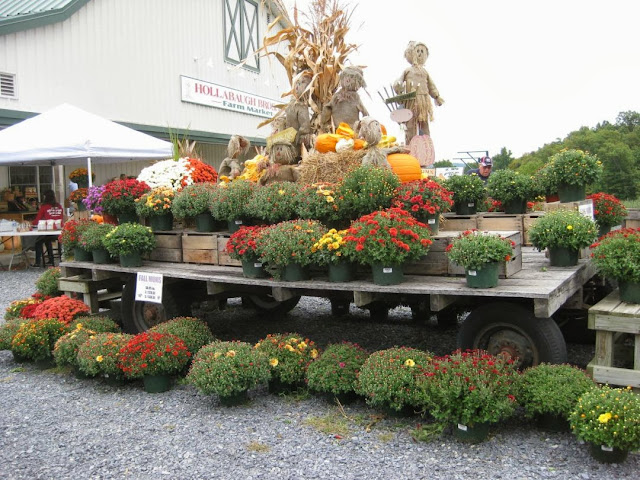 They were having a harvest celebration day with cider and cookies.  Aren't the mums lovely? 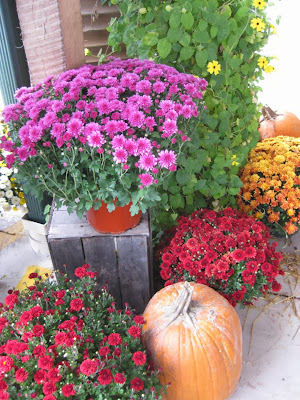 And what a porch full of pumpkins! 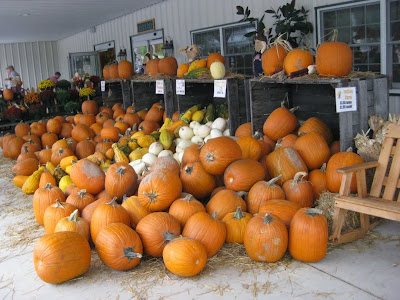 Inside are attractive displays of all kinds of edibles; sauces, vinegars, honeys, baked goods, ice cream, soap and so much more. 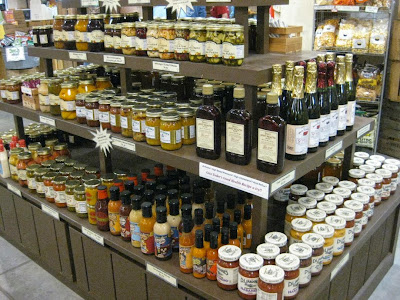 But the apples are why we were there.  We love picking from the huge bins.  There were about two dozen varieties to choose from.  You buy a bag and then fill it with your choice.  This picture only shows one row of bins.  There are many more outside under the porch roof. 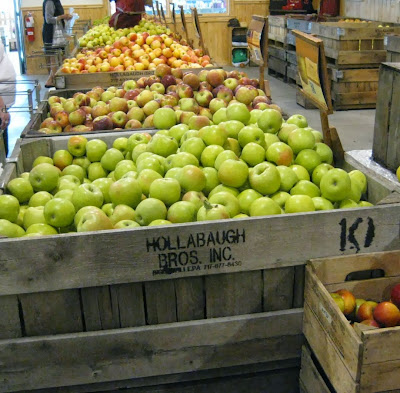 Last year I dehydrated apple slices.  This year I'm going to make and can applesauce.

A friend and I went to the Healthy Grocer in Camp Hill a few weeks ago.  I guess from the name you can conclude that it's a health food store, organic grocery, specializing in vegetarian, gluten-free, etc.   I forgot to take pictures while I was there.  I did buy something that I've wanted to try and hadn't seen any available until now.
A seed sprouting device.
This one is very simple, just a series of plastic screen lids that fit on a wide mouth mason jar.  I love sprouts in salads and use them in chow mein. 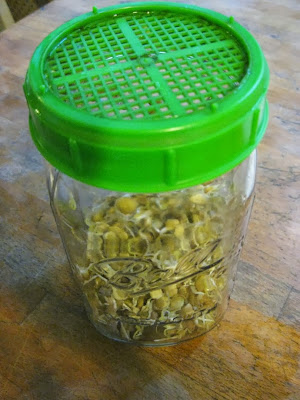 These are lentil sprouts that I lightly saute until browned and add them to omelets or put them in soup.  Cool, huh? 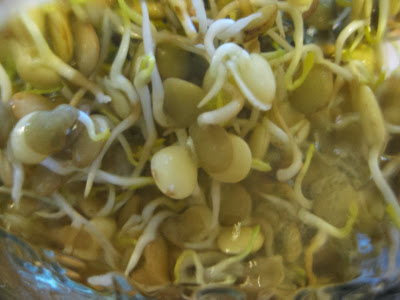 I said the last time that I would show how to make raw spring rolls.  Since summer is over, I'll save that for another day.  Instead I'll share one of my favorite soup recipes.

Chop chicken breast into bite sized pieces.  Spray large Dutch oven or stockpot with cooking spray.
Add chicken, celery, jalapeno and onion and saute until chicken is lightly browned.  Mix in the garlic, cumin, and bouillon paste and cook for another minute or two.  Add the chicken broth, water and smoke flavoring.  bring to a simmer and add the hominy and cilantro.  Cook another 15 minutes to blend flavors.

Easy peasy and very low in calories.  One and a half cups is only 4 of those thingies that Weight Watchers count.

As with all my recipes  the amounts of ingredients are open to interpretation.  Nothing is engraved in stone in my kitchen.  So experiment and make it your own. 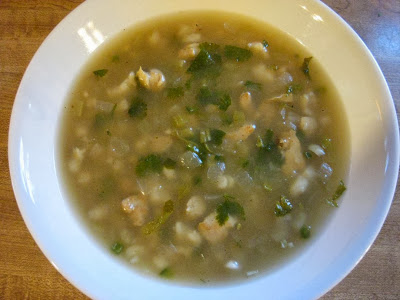 The uniform sewing business has been slowing down so I've had time to sew for myself for once.  I've been needing a jacket for fall.  My stash of wool fabric for jackets has been growing for several years thanks to some of the great 50% off sales at the PA Factory Outlet in Lemoyne.

I decided on this very basic Connie Crawford pattern from Butterick. 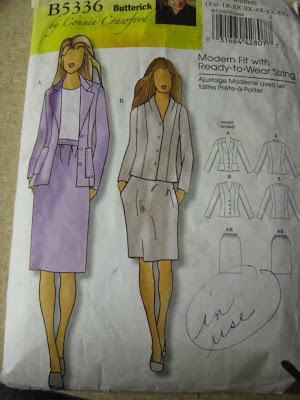 The black and natural herringbone twill was a light weight wool so to give the jacket enough body, I interfaced all the pattern pieces with a knit interfacing fabric that would 'give' with the drape of the wool. 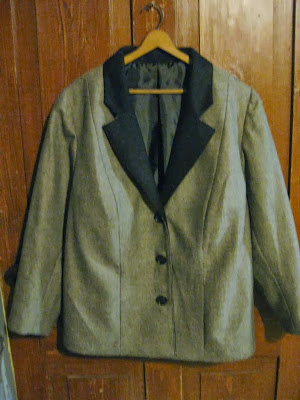 It actually looks better on me than it does hanging on a hanger.  I just wasn't dressed to model when I took this picture.  I'm very happy with the outcome.  It fits perfectly.  I even made a scarf to go with it.  Now I have something other than a fleece-lined hoodie to wear to weddings and funerals.  HA! 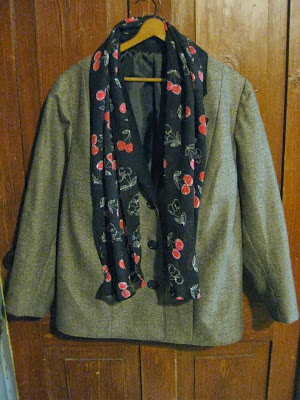 I also just finished these socks.  No, not to go with the jacket!  Just for the fun of purple and lime green... 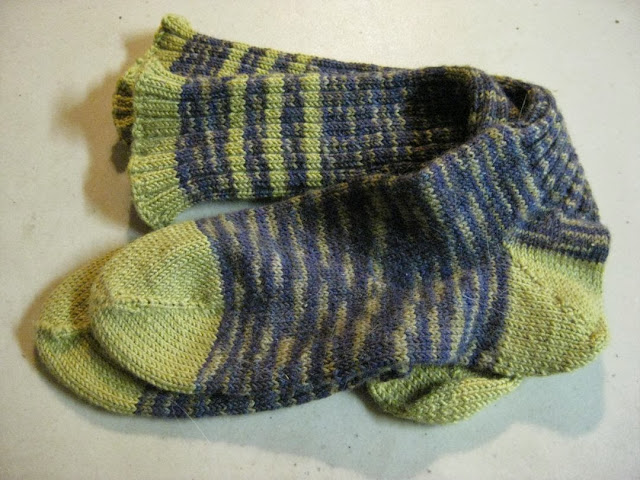 Thanks for stopping by!  Hope you're having a great fall season.  Soon the leaves will be changing colors and the frost will be on the pumpkin.
Posted by weaverpat at 8:13 PM 11 comments: