In addition to the rughooking groups that I attend, I am also a member of the South Cumberland Fiber Guild. The meetings take place on the 3rd Saturday of the month at the Shippensburg Library annex. This is a diverse group of people interested in all aspects of the fiber arts, including spinning, weaving, knitting, crocheting, dying, basketmaking, rughooking, raising sheep and other fiber animals, and growing fiber producing plants.

You can get more information on the website www.southcumberlandfiberguild.com. Along with a schedule of events and activities in which we participate. Some months we have a demo or learn a new skill. Others we simply bring our own projects to work on. We are a very relaxed, laid-back group. Literally!!! This is Linda, relaxing at the tapestry loom. I think she had a difficult week at work! 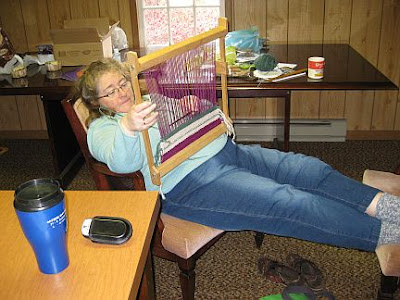 Pam K. is knitting a lovely throw. She spins, knits and raises llamas and alpacas. 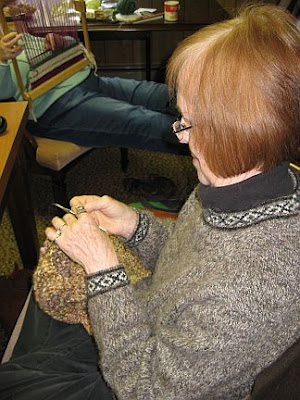 This month we are learning the basics of bobbin lace, under the direction of Candy K. I won't go into the history of bobbin lace, there's loads of good information on the web, along with companies who supply books and materials.

The simplest explanation of bobbin lace is, lace made by twisting and crossing of threads that are wound on thin wooden pins. The threads are woven back and forth to make patterns. For our beginning piece we only used 14 bobbins, but in more intricate pieces, up to 100 bobbins may be needed.

Candy is trying to get us off to a good start by explaining how to set up the bobbins to Stephanie and Nancy. 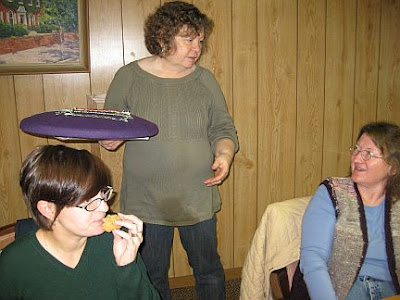 Shirley and Pam have made some progress. I think they understand the basic technique. 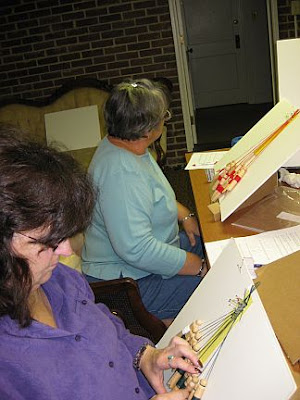 Yes! Vicki and Stephanie are doing well, too! 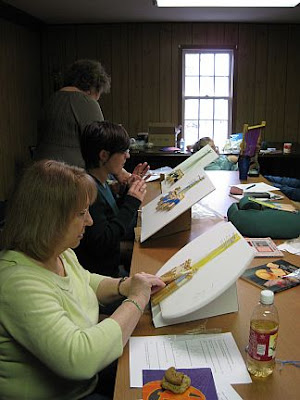 A few samples of the basic lace that Candy has made. Her lace pillow (the purple thing) is a purchased one that she found on the internet. 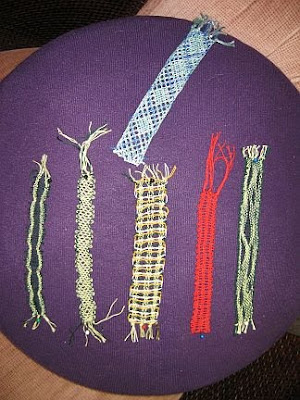 This is my lace pillow which I made myself many years ago. I became interested in bobbin lace after seeing it done at an antique show in Harrisburg way back in the 70's. At that time (no internet!!!) information on lacemaking was difficult to find. Luckily we live near The Mannings in East Berlin, PA and they had a few small beginning booklets and some bobbins. But like many other things I have tried, after accumulating all the equipment, I went on to something else! 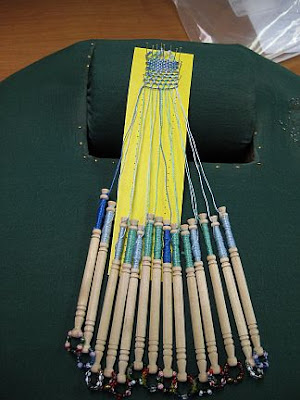 Nowdays there are many good lacemaking instruction books. The covers show some of the lovely lace that can be made when you become proficient. 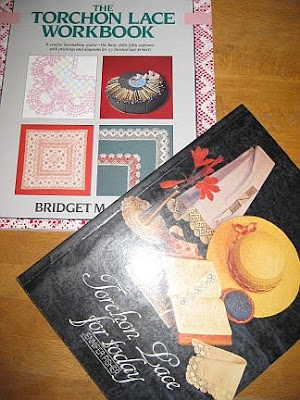 These are my two small samples that I made a few years ago when I decided to get out the lace pillow and try again. Needless to say, that's as far as it went! 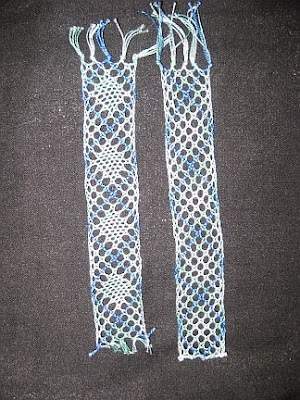 Nor have I worked on my rughooking for several weeks now! Shame on me!!! I don't know what I'm doing with my time! And now here it is, only a few days till Thanksgiving and the house needs cleaned up. Yuck!!!
Have a great Turkey Day!
Keep on Hookin'!
Posted by weaverpat at 8:11 AM 6 comments:

Last month we lost our dear old kitty, Wizzard. She had been blind for several years, and pretty much confined herself to our bathroom where she felt safe and had her bed in the bottom of the closet. She was 16 years old and had slowly declined over a period of months. when she quit eating, we made the tough decision. It was sad, but expected.

Yesderday our 6 year-old Robbie also passed on. He had fallen from the windowsill in the kitchen a few months ago. We wondered at the time if he had a seizure, since he was shaking all over and had a hard time walking. The vet gave him medication for it but the phenobarb didn't seem to help. Then he switched him to prednisone and that seem to make a difference.

Still over the month, he had episodes, which I attributed to pain in his back or leg as a result of the fall. He would be walking along normally when he would suddenly stop and hunker down and seem kind of oblivious to his surroundings. Then it would pass and he would go on. Some days he seemed OK, others, especially when the weather was damp and rainy, he'd have several of these 'episodes' a day. The past few days have been dreary so he had not been doing as well.

He was lying on an old trunk with a cushion on it and when he tried to get down, he fell again. Once again he seemed distressed and trembling, but was able after a few minutes to walk out to a favorite spot beside the woodstove. I called the vet right away and by the time I got off the phone, he was lying on his side, hyperventilating, and drooling. We rushed him to the vets, but there was really nothing she could do. He had gone into shock. I didn;'t want him to experience any more pain than he had already goning through, so had him put down.

The vet said that without extensive testing she had no way of knowing how to treat him and that he would not have survived long enough to go through all that. Not to mention the stress that would have been torture for him! She guessed that a tumor might have been involved.

Anyway, I am devastated and heartbroken! Zip and the three remaining kitties have been a great comfort.
Posted by weaverpat at 9:21 AM 7 comments:

A few weeks ago I discovered the blog, Mennonite Girls Can Cook. They have some wonderful recipes! Being a bread lover (love to make it, love to eat it!) I just had to try the No Knead Crusty Italian Bread recipe. I started by mixing it up last evening, then it sits on the counter all night. I got up this morning and finished the rising and baking. It came out absolutely wonderful and it's sooo easy.

If you decide to check out the instructions and give it a try, I'll tell you that I made a few small modifications. I didn't have instant yeast so used 1/2 tsp. regular granulated yeast. I added 2 T. sugar. I used exactly 1 1/2 cups water. I don't have a Dutch oven so used a French White Corning casserole dish 8 1/2 across and 3 1/2 inches deep. It was just the right size. 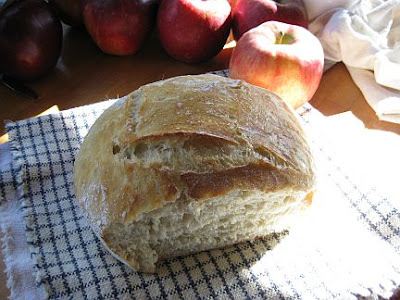 Yesterday Zip and I went to Dillsburg to pick up my Baltimore album quilt. I had started this quilt about 10 years ago at a class at the Sewin Place in Chambersburg.. That's where I first met Linda Keller. Then we didn't have contack for several years until we discovered through my son that we were both rug hookers.

Anyhow, it took me 6 years to finish the needle-turned applique blocks and border. Then I put it away, hoping the quilting fairies would by some miracle do the basting together of the top, batting, and backing. Well, I finally found a quilting angel in the form of my friend Esther, who purchased a long-arm quilting machine this past year. 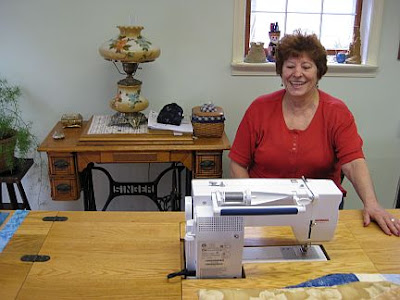 Esther's husband Ray converted their double garage into a fantastic quilting studio. Don't know how I missed getting a picture of the man who did all the work! Ray and Zip are old friends who worked together for years before they both retired. He did a great job making the studio nice and birght with plenty of windows. And look at that floor! WOW!!!

And here is the amazing quilting machine! 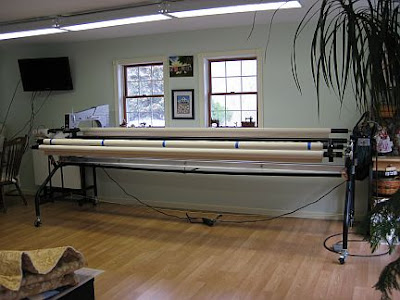 A client of Esther's ordered these quilts to give as Christmas presents. 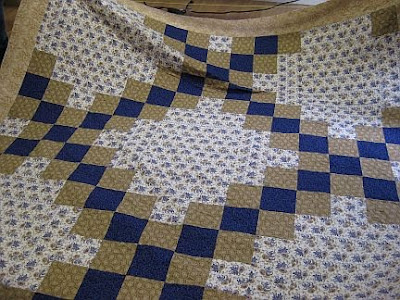 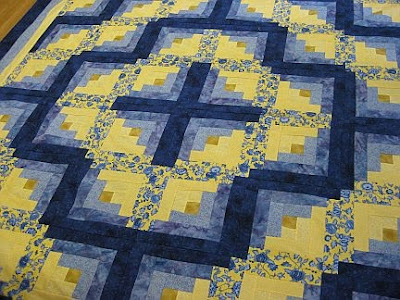 She even has a huge design board on the wall so you can get the full effect of the fabrics. I particularly like the colors in this one.

On the table is a fabric collage of her Great Dane, Princess. 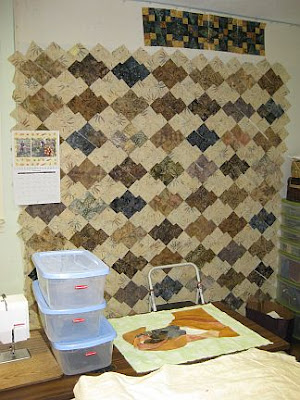 This lovely sewing cabinet was a birthday gift from Ray. Almost makes me want to have more birthdays! 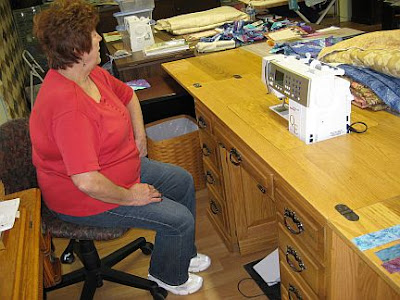 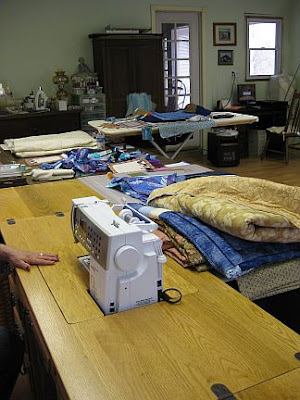 We had a great time talking about quilts and fabrics. I didn't get a picture of her stash! Darn!!! It was very nice.
We had an enjoyable lunch at T J Rockwell, which is a restaurant beside Ashcomb greenhouse.

This is my quilt! Zip and I took it to the front porch to get the best light, but it's so big (king size) that there isn't any place to spread it all out for a good picture. 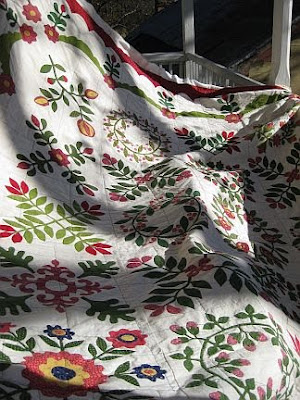 I've been so busy this week I haven't had time to hook.
I'm cooking apples for sauce. Better get back to the kitchen.