Even though the tail end of the hurricane is still circling over south central Pa, we have only mild rain and moderate thrashing of the trees.

The weather for the past two weeks has been heavenly!  Daytime temps have been in the low 80's with lovely cool nights that make sleeping a pleasure.  The curse has been lifted and we are getting some much-needed rains.  The garden, what's left of it, is recovering from the drought of the last month and a half.  We've been getting enough fresh veggies to make some tasty salads. 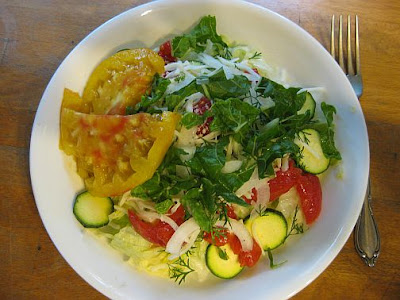 This is the way summer is supposed to be!  It makes getting up and viewing the sunrise a joyous occasion.

The only unhappy note is that my dear friend, Willa, is moving back to Missouri.  She and Chuck have been planning this for about a year, and now the time has arrived all too soon.  On Thursday evening, her last night here, we went out to eat together at Biscotti in Shippensburg.  I will eventually be updating my restaurant review page with the pictures, but for now I just have to show you the dessert. 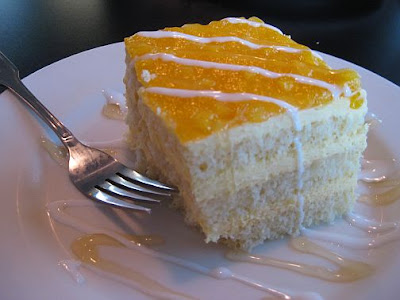 This is their mango mousse cake.  In my sixty-plus years I have tasted many cakes.  Some good and some left a lot to be desired.  May I say that I have found the PERFECT cake?  Oh my goodness, is this cake DELICIOUS!!!  The mango flavor is sublime!  I checked for recipes on Google and found several.  I can't wait to try reproducing this wonderful treat.  It was the perfect ending for the farewell dinner.

My legs have recovered but the trips to the hospital for wraps continue twice a week. These doctor visits are seriously cutting into my free time.   On Tuesday I will be measured for the compression stockings that I will be wearing from then on.  Then back to the fun stuff like day trips to interesting places instead of sitting in a waiting room for 45 minutes.

But I have not been idle.  While sitting around with my feet propped up (NOT!!!)  I started a knitting project.  This is a knit-along group that is beginning on Ravelry on Sept. 10 with Julie from Knitting at Large.  Last weekend I found myself without a current project.  The yarn began talking to me to get my needles and start playing with this sweater. 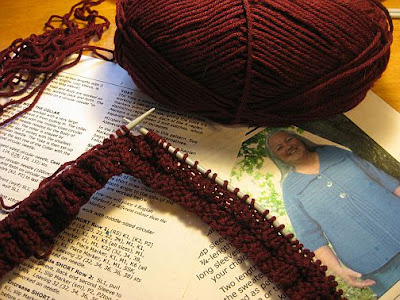 It's a Cabin Fever pattern by Deb Gimmell and is knit from the top down.  There is no seaming necessary to finish the sweater, which means the pieces don't have to be BLOCKED before it can be put together.  Sounds ideal for me because I HATE blocking!

I've been knitting like a madwoman!  The obsession is to get an area done so I can see how the next part works.  Will it fit???  I just couldn't wait to get to the underarm part to very carefully try it on.  I am using an acrylic yarn in a worsted weight that is knitting up into a very sturdy fabric.  I'm thinking of making it into a jacket by adding a matching plaid wool lining. 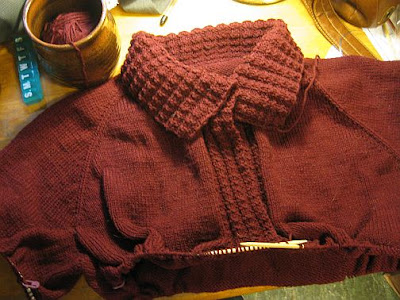 This is the progress so far.  I started on one of the sleeves to check how the decreases would work. 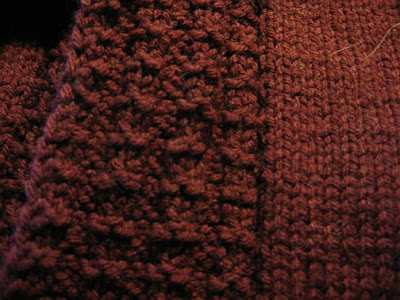 I love the pattern of the collar and the front bands.

Since I haven't quite decided how the lining idea is going to work, I haven't put in any button holes.  I think the buttons will be sewn on the outside on top of large snaps for closing on the inside.

Isabell has been a close companion.  She loves when I knit.  Do you think she has a rather devious look???  She's waiting her chance to run off with the yarn ball. 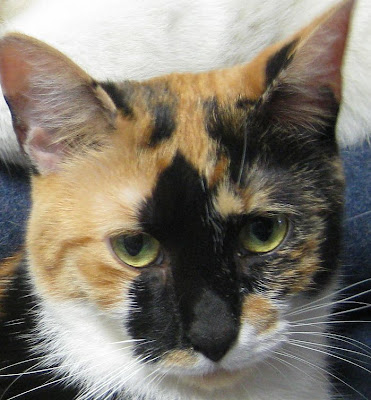 Hope all of you have survived the hurricane with a minimum of stress and damage.
Until next time, happy hooking, or whatever creative endeavors you enjoying.
Posted by weaverpat at 9:41 AM 18 comments:

They Gave me the Boot

First, an update on Zip.
He got the report from his 24-hour heart monitor and it was fine.  His heart is only skipping a beat occasionally.  He's quit smoking and has cut way back on the caffeine.  I just wish more restaurants offered decaf iced tea!  The doc says he is good to do whatever he feels he can handle.  Mostly playing the guitar and fishing!

This past month has been soooo hot.  Ever since I was pregnant with Brad I have had problems with fluid retention and varicose veins in my legs.  It's worse in the summer heat and because of it I wear generic low cost support hose.  This year has been particularly bad because the heat has made me so sluggish and unwilling to do anything that amounts to the tiniest bit of exercise.  Through that high 90's stuff I sat in the house in front of the fans trying just to breathe.  Also my legs were so swollen that I could only get my most stretched out support hose on, which totally defeated the purpose.

My legs have paid the price.  They became so infused with fluid I began getting blisters.  When the blisters began to seep, I was freaking out over the chance of infection.  Sooooo....I bit the bullet and went to the doctor, knowing that I would not like what I would be told.  He made an appointment for me to go the wound clinic in Chambersburg right away.  Yikes!!!

The looked at my legs and were very positive about the outcome.  They have the cure!  But first....they had to SCRAPE the affected area.  With a SCALPEL!  Discomfort is a gross understatement.  Excruciating is more like it!  But then a soothing gel was applied and several layers of nice tight leg wraps that felt wonderful.  This treatment is called the unnaboot (pronounced uni-boot). 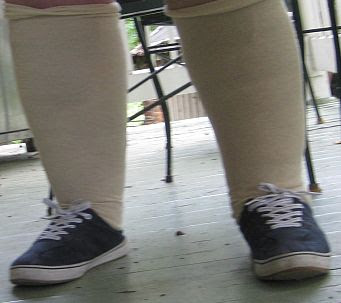 I go twice a week for a rewrap.
The swelling is way down and the seepage has stopped.  I think I'm on the way to recovery.  They told me I can go about all my normal activities, but must take time out periodically to put my feet up and sleep with my legs elevated.  I actually feel so much better that I've been using the treadmill and spending extra time walking around in the grocery story.  At least I may end up with two thinner body parts!  Ha-ha!!!

As part of my recovery, Willa, Diane and I went out to eat last evening.
Our pick for this month was the Cafe d'Italia on the square in Chambersburg. 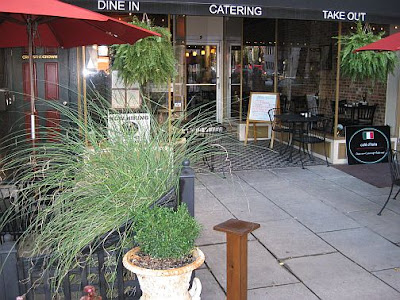 We've eaten here before and enjoyed it.
Our appetizer was baked brie on fingers of Italian bread with a topping of fruit chutney. 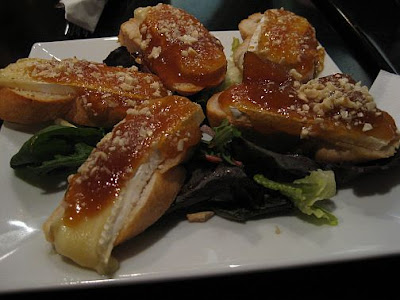 Diane chose the special of the day, chicken and spinach ravioli topped with cream sauce and more spinach and chicken breast. 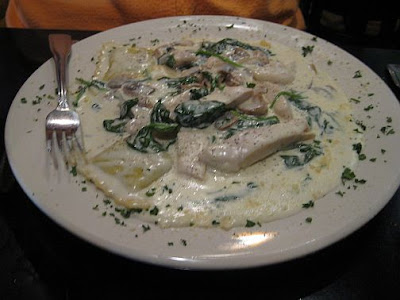 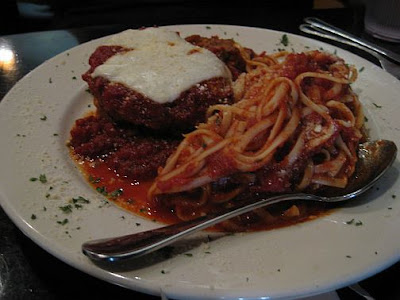 For me, chicken salcicci with chicken breast, spicy sausage, spinach and onion in an oil and white wine sauce with lots of garlic.  Yum!!! 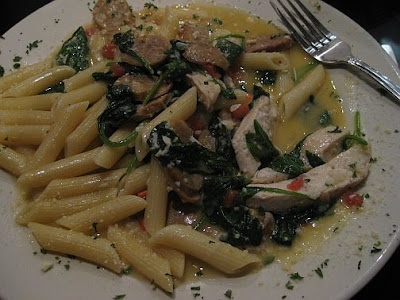 It was a huge portion so half of mine went home for Zip and I to share for lunch.

The desserts:  a frozen pistachio pudding with swirls of chocolate and nuts on top and in the back is limoncello. 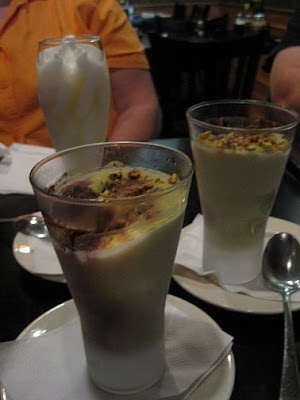 They have an open kitchen so that you can see the food being prepared.
It's one of Chambersburg's nicer places to enjoy a meal. 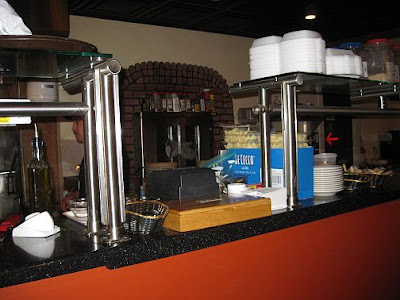 Several weeks ago Lauren from Rugs and Pugs visited our town.  She showed a picture on her blog of our lovely fountain in the center of town.  You can see the fountain from the outdoor dining area of the Cafe d'Italia.

There are two other fountains in town which most people don't know about unless you have grown up here.  One is at the Chambersburg power and light plant near the firehouse on south Second Street. 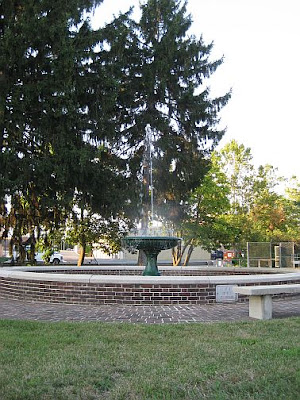 But my favorite is the fountain at the intersection of King Street and Glenn Street in the lovely early 1900's residential area in the west end of town.  It's a little treasure! 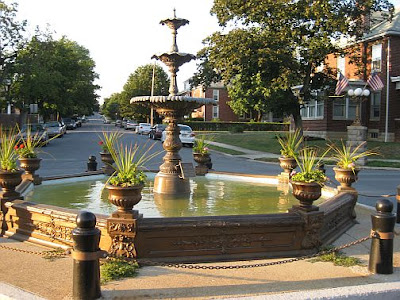 I want to thank Sharon from Moosecraft for the wonderful book I won in her give-away.  It's the Rughooker's Bible written by Gene Shephard.  I don't know why I haven't already purchased this book because it's so full of useful information.  Even though I try to be a primitive hooker, I'm still interested in being able to do shading.  This book has so many wonderful pictures and instructions
for things I've been wanting to learn that I've decided my next project will have to be designed around some of these techniques.

The weather has been a bit cooler the past few days.  The sky is clear and blue and the breezes are mild.  Perfect weather!
I hope it's as pleasant where you are.
Posted by weaverpat at 8:51 PM 20 comments: