Stuck in the Kitchen

Stuck in the kitchen, chained to the sewing machine.
It sounds like the plight of the 1950's housewife.  It seems to be where I've been lately, but not regretfully.

Actually I like being stuck in the kitchen.
Since I cleared my counter tops several weeks ago of knitting and rughooking projects, plus piles of books and papers, I've been on a happy cooking binge.  The new oven is wonderful.  Don't know how I've lived without it!  So far I've baked cookies, bread, and casseroles and they have all come out good.

The breakfast strata made with sausage and brussels sprouts and cheese baked perfectly.  No burning the bottom and edges. 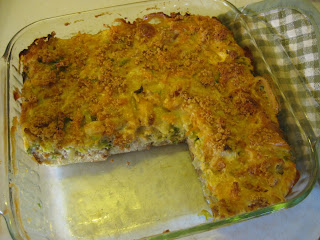 Since morning is the time when I have the most energy, breakfast has been the meal that has brought out the creativity.  With asparagus season being upon us, I couldn't resist rolling some in crepes with mustard cream cheese and crumbled bacon. 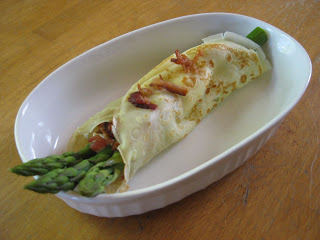 I have to confess that the Food Network is one of my guilty pleasures.  I love Chopped, Iron Chef and Diners, Drive-ins and Dives.  But, I DO NOT watch during the daytime!  Only after 6 p.m.!!!  Do I sound like an addict justifying my addiction because I only indulge after a certain time of day???  You bet!

Since the 'pink slime' in grocery store burger revelations, Zip and I have decided to grind our own burger and sausage meat.  I've also been irritated by the 'enhanced' label on many meats.  Since when is adding water to make an item weigh more an enhancement?  This past week our grocery had chicken thighs on sale.  We bought a pack of ten thghs.  Look at the excess amount of FAT and SKIN that I removed from them.  And there was still plenty of fat and skin left on the meat for pan frying. 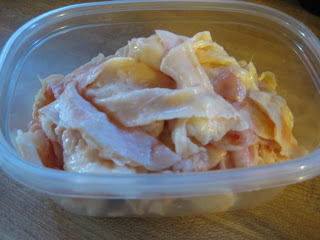 I fried it crisp and it will go to the stray outside kitties who come by for a meal.

We're hoping to get a smoker this summer so we can make some good lean smoked sausage.

OK, we're done in the kitchen and off to the basement.  Not the most pleasant place, but it's where we keep our two container-sized citrus trees, a lemon and an orange.  We repotted them last year and the lemon didn't give fruit.  But...Horay! the orange gave us two fruits! 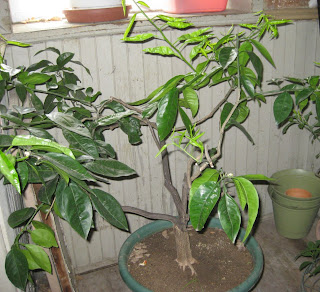 The trees themselves aren't that attractive, but look at the lovely fruit!  They are more like clementines with a thin skin and sweet flavor. 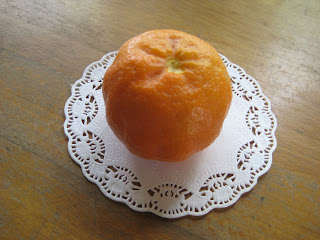 The other passtime that's been using much of my creative energy has been sewing.
My sewing for Brad and Kami is now mostly hats and shoulder boards for their re-enactment business. 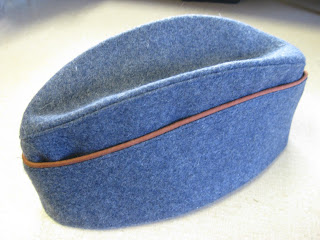 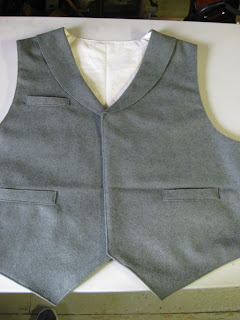 Two weeks ago when we had those few days with the temperature in the mid 70's I was digging around in my selection of summer clothing and found that I had NOTHING to wear.  I am not kidding.....ONE short sleeved shirt!!!  After checking out the selection at KMart, I decided it is time to do some sewing for myself.  So far I've finished one shirt and have several more in the 'almost' stage. 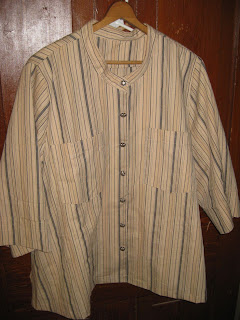 I started with some of my least-favorite fabric in case the pattern didn't come out right.  I'm pretty well pleased but next time will add a little across the shoulders.

I'm off in a few hours to a Knitting at Large meet-up in Frederick, MD.  It will be fun getting together with a bunch of women and comparing projects.  I hope to take lots of pictures.  If I don't forget!

Have a great weekend! 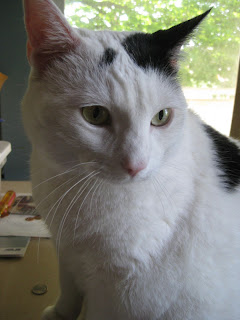 Zip and I have been amused lately by the crazy antics of the kitties when we opened the windows to let in the first of the warm spring air.  They fight over the rights to the window sill and then run like maniacs through the house, jumping on furniture and chasing each other.  Amazing how inspiring a little fresh air and sunshine can be!

I've been almost as bad.  The self-imposed hibernation of the winter is over and I'm out running loose and wild like a sailor on shore leave.  LOL!
My friend Marian and I made our first trip to the greenhouse to celebrate the season, though we know it's a little early to set out plants.  But looking is such fun!  These pictures are from Ashcombe near Williams Grove, PA. 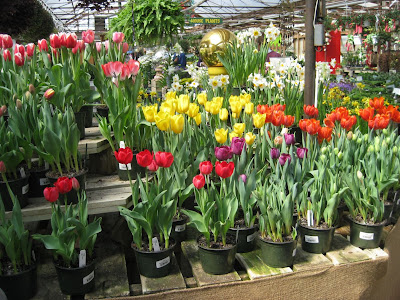 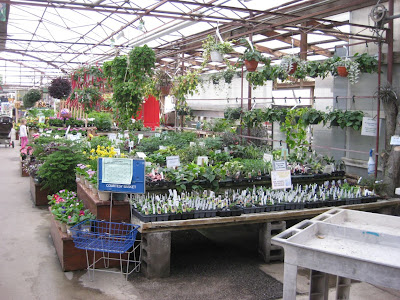 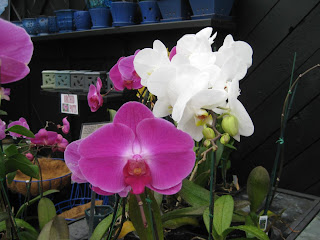 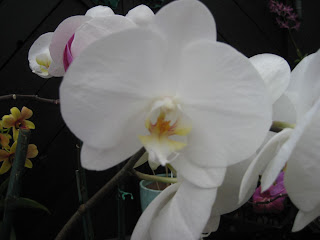 Aren't those orchids lovely?  The following Saturday they were having an orchid sale sponsored by a group of local orchid growers.  I wish I had the environment for successfully growing these beauties.

We strolled around enjoying all the lovely plants and the decorating accessories that they have available before going to lunch at the Pizza Grille in Carlisle.  The pizza with the roasted tomatoes and basil pesto was excellent!  Then we went next door to Knisley's farm and pet center to look at the peeps.  We have both raised chickens in the past (Marian more recently than Zip and I), and were considering the possibilities. 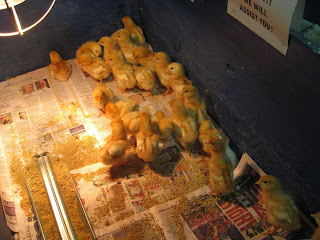 She already has a chicken coop, we do not.  This one is really nifty for just a few chickens and can be easily hosed out when it needs cleaned. 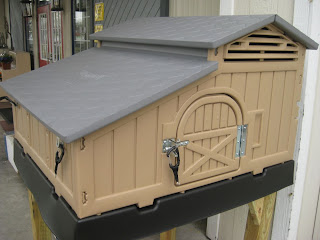 Unfortunately it's $400+!  A bit pricy for four little hems!
In the end we came home without peeps.

The next day Kami and I went to East Berlin to Mannings and Woolgatherings.  We were checking out the knitting and crochet books and looking at yarn.  Unfortunately Mannings yarn is mostly out of our price range (I'm a yarn cheapo!).  But Carol at wool gatherings just happened to have a great deal on some yarn and we left with a hamper full.  Seventy five skeins!!!  which Kami and I shared.

We had lunch at Sidney, on the square in East Berlin.  It's a very upscale establishment run by a chef/owner who creates dishes of the kind presented on the Food Network.  Dining as an art form! And I forgot to take pictures of our lunch!!!  I did get a few shots of the lovely colonial dining room.  Everyone else was outside on the patio enjoying the nice weather, but we decided on the indoor ambience. 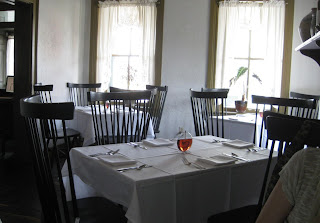 For more information about Sidney and the amazing culinary creations, here's the link-
http://www.restaurantsidney.com

My new laptop and I haven't come to total companionablity yet.  The keyboard seems VERY sensitive and I am constantly  pabumping something that puts my cursor back in the middle of a sentence I've already written.  When I finally notice, my post has gone all wonky.  Waaah!!!
We'll eventujally have a meetiong of the minds, I hope.

So far the kitties have been happy with the new table arrangement.  They are sitting comfortably on either side of the keyboard where I can reach out and pet them.

Penny on a pile of wool. 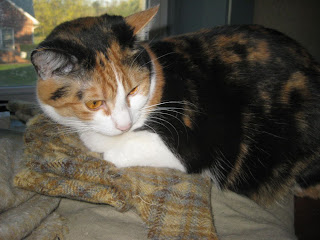 Deiter on the knitting bag. 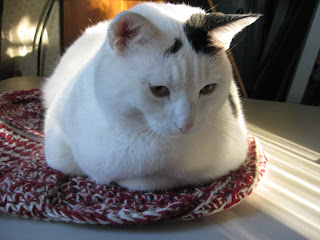 Izzy decides to join the party. 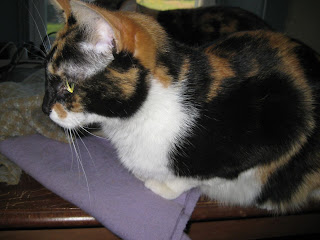 No furry little bodies on the keyboard!  My babies have become good little computer companions!

Have a wonderful weekend everyone!  Enjoy your Easter or Passover or whatever you celebrate, even if it's just the joy of Spring.