The Quest (Lust) for Corn 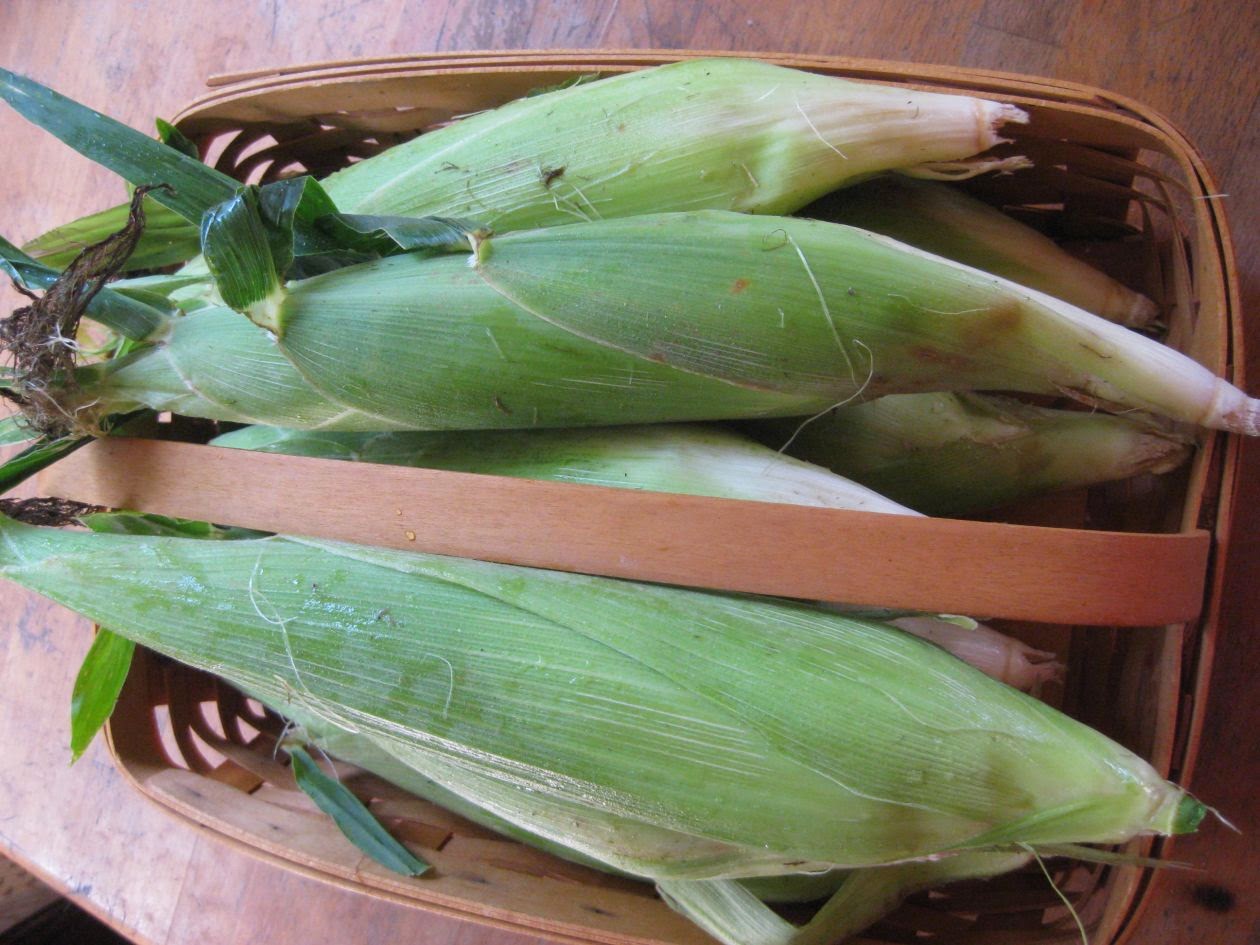 Zip is a lover of corn.  It's his favorite vegetable.  You might say he's a corn-a-holic, the Corn Meister, a connoisseur of the cob, a corn wort.

The quest for fresh sweet corn starts sometime in late winter when Weis Market starts importing corn in the husk from SOMEWHERE.  Somewhere far  enough away that the corn has that held-in-refrigeration-for-who-knows-how-long taste.  Usually a disappointment, but we have to try it.  So we hold off for a week or two.  Then it's time to try again.  Eventually they get in one or two good batches.  But we keep buying.

Finally summer arrives and LOCAL corn is available.  Oh Glorious Day!!!
So we start making the rounds of the farm stands and markets.  Now where did we get that really good batch last year???  And what variety was it???  Bodacious, Incredible, Butter and Sugar, white, yellow, bicolor?

We begin to buy and try and buy some more until we have corn coming out of our ears (pun!).
The trouble with corn is that it ages.  What was good one week will be probably be too old by next week.  But that doesn't always register with Mr. Corn.

The best way to not get snookered by aging corn is to pull the husk down a little way and LOOK at it.  Are the kernels large and waxy looking?  If so,  I don't want it.  But Zip hates to check the corn in front of the people selling it.  He says they disapprove.  It's embarrassing.  So I end up having recipes where I can hide inedible corn.  Soups, fritters, quesadillas, salsas.

But this week we were lucky and found the best corn of the season so far.  The farmer had the good sense to pick it while still young and tender.  Even I, who am usually to the point by now that I never want to see another ear of corn, loved this.

Zip wanted me to add that the name of this corn is 'Mariah', like that singer, only sweeter and more luscious. 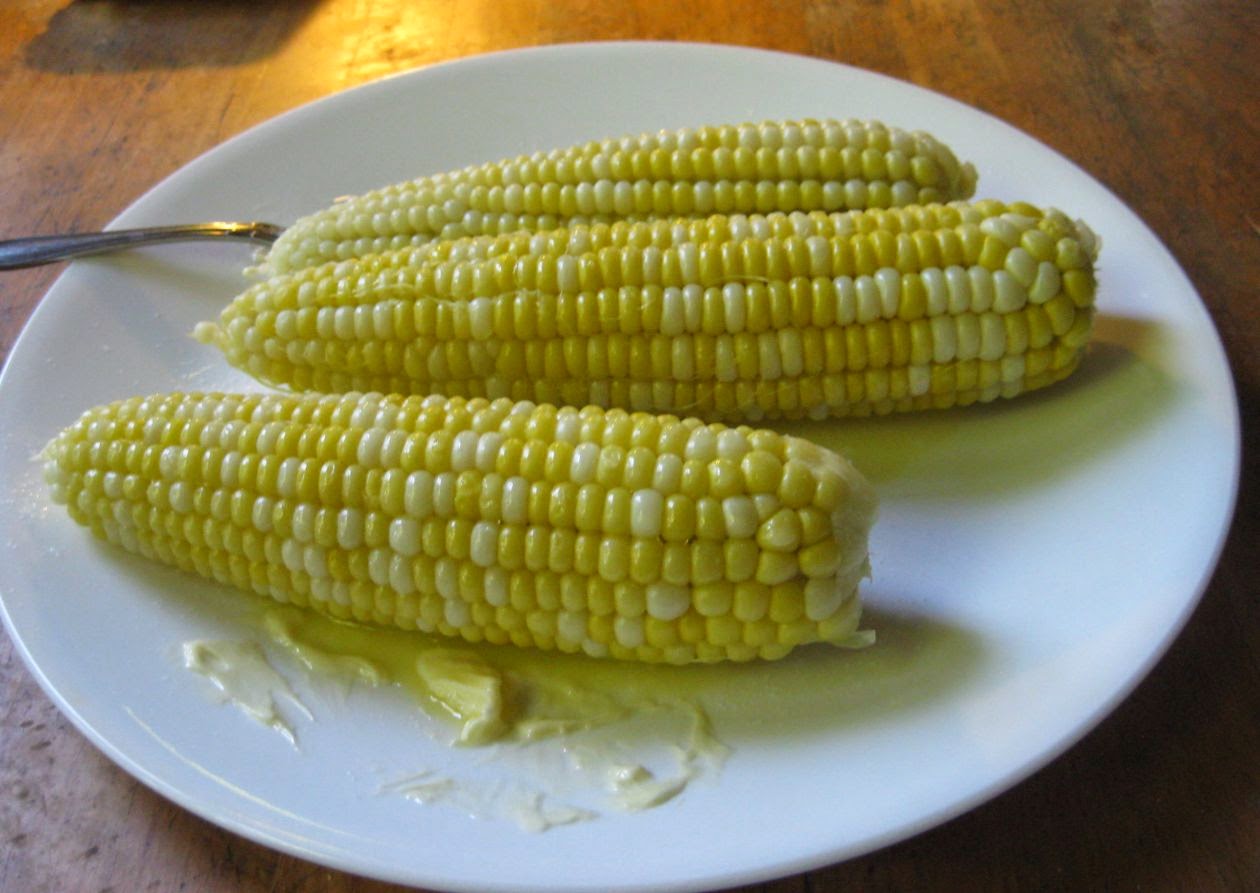 If you think humans are the only ones affected by this CORNINESS, you would be wrong.

Only minutes after Zip laid this bag on the table, The mania began.  I came into the kitchen and saw this.  Good grief! 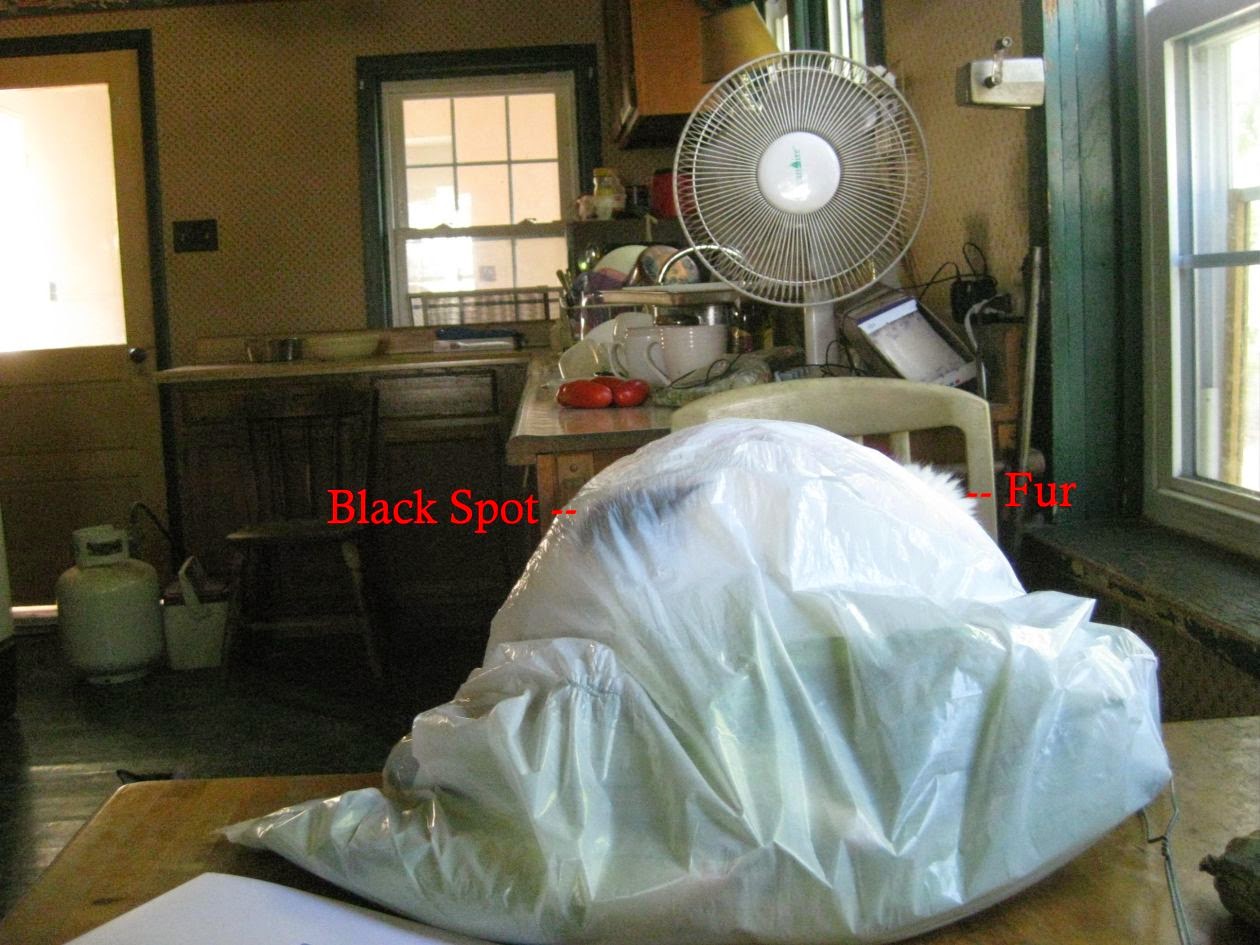 Keep plastic bags out of the reach of your children! 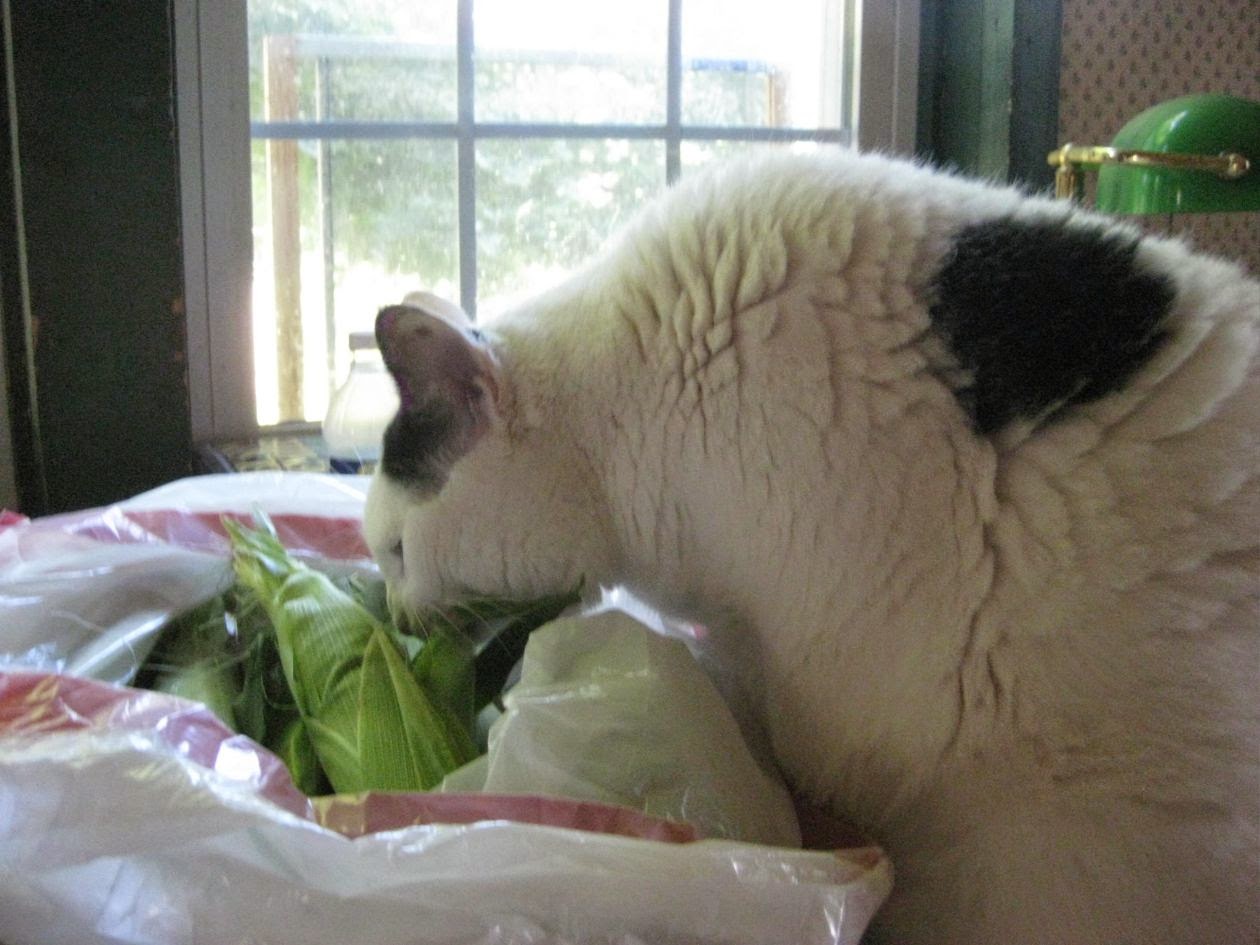 Let them dig in trash cans instead. 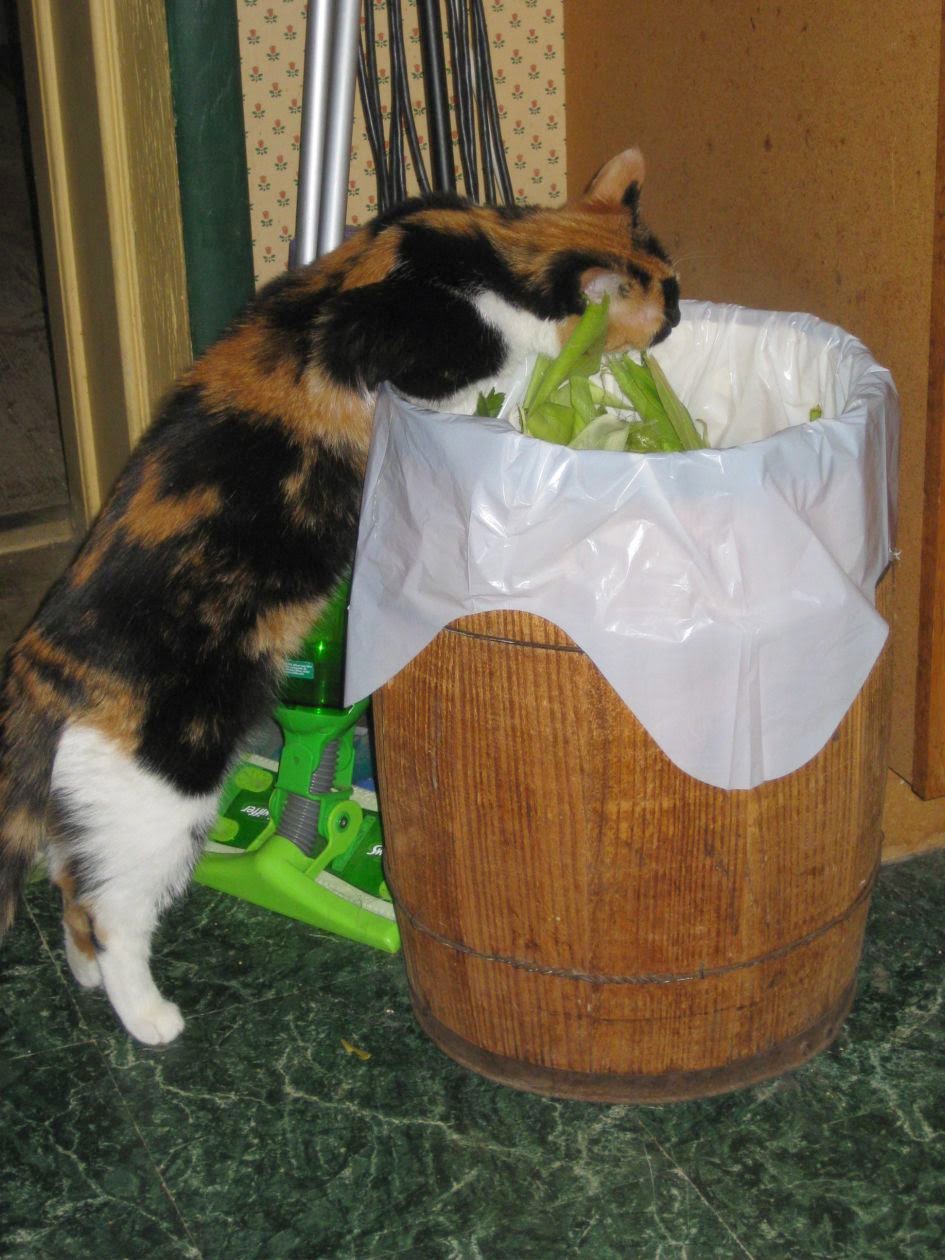 The kitties have this irresistible attraction to corn also.  They go crazy trying to get husks to chew on.  Unfortunately they barf the pieces all over the floor later.
Happiness is NO PICTURES!!!

OK, I think I've said enough on that subject.
Last week a spinning and weaving friend invited me and several like-minded women to a day of relaxation and chatting under the trees at her lovely 19th century farm house.  The weather was beautiful, the company was great, everyone had a nice time.

I took some dog hair to card, but never got it out of the basket.  As usual I was too busy talking.
Our hostess using her Canadian production wheel.  At least I think that's what it is. 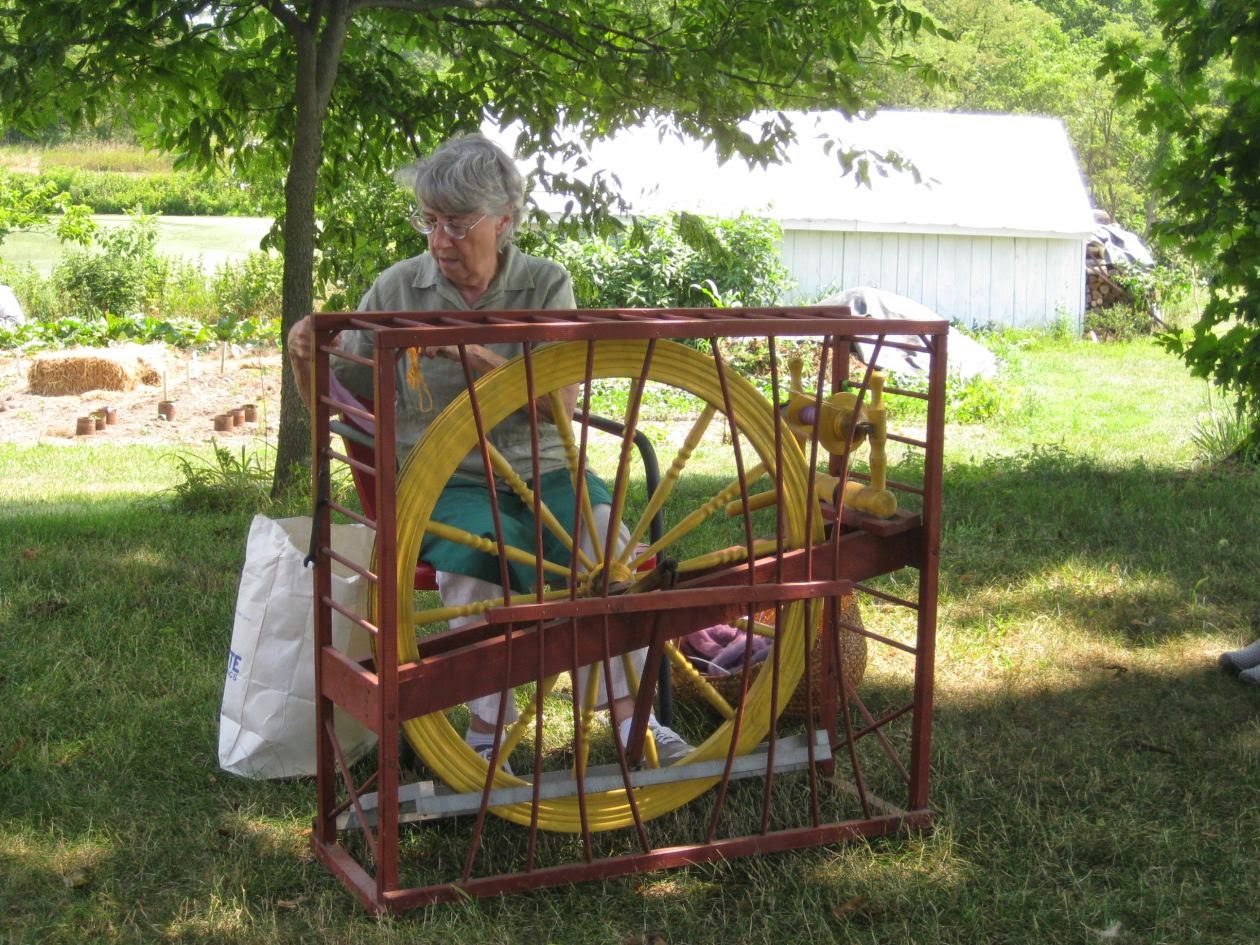 Taking the spun yarn off the bobbin and putting it on the niddy noddy to be finished. 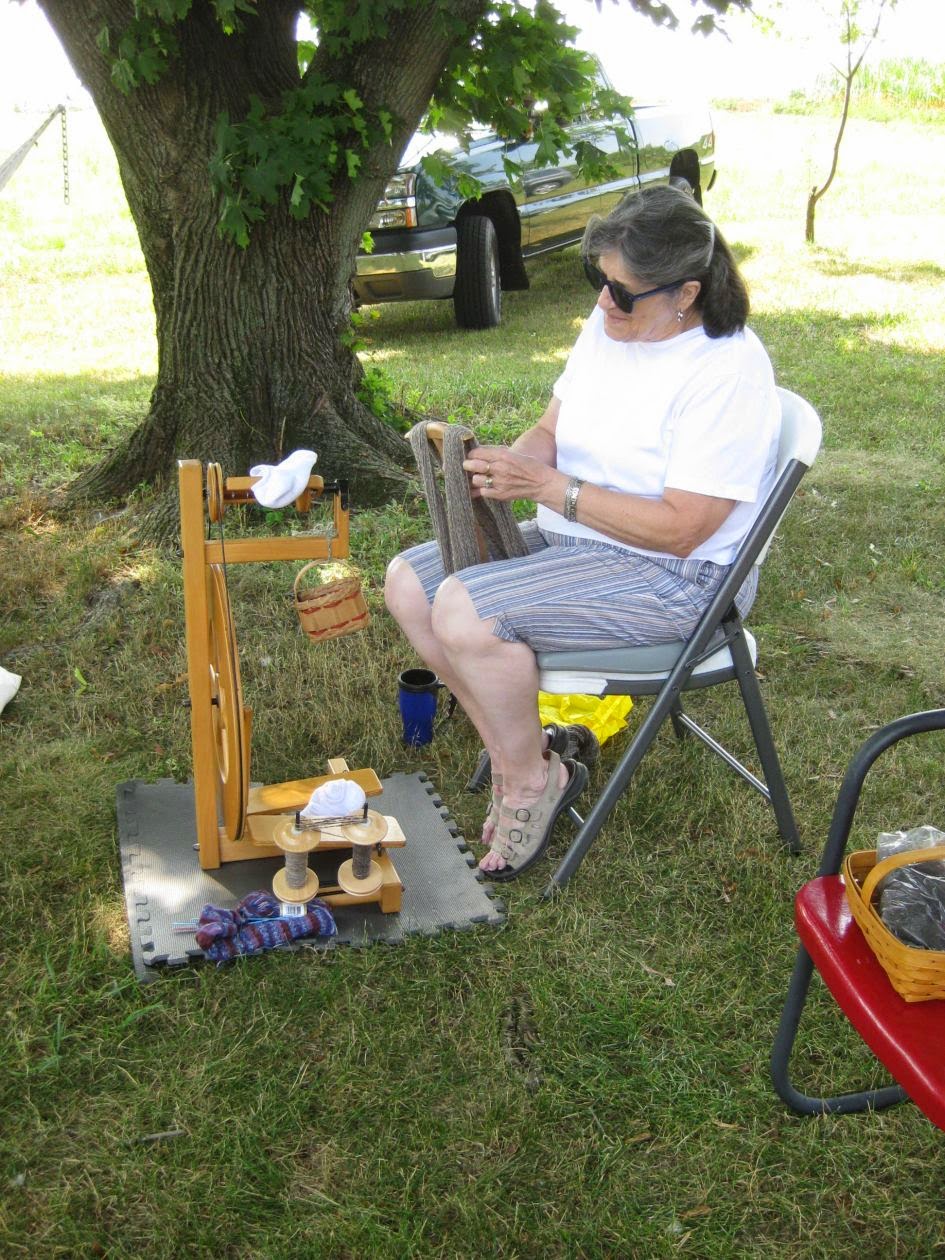 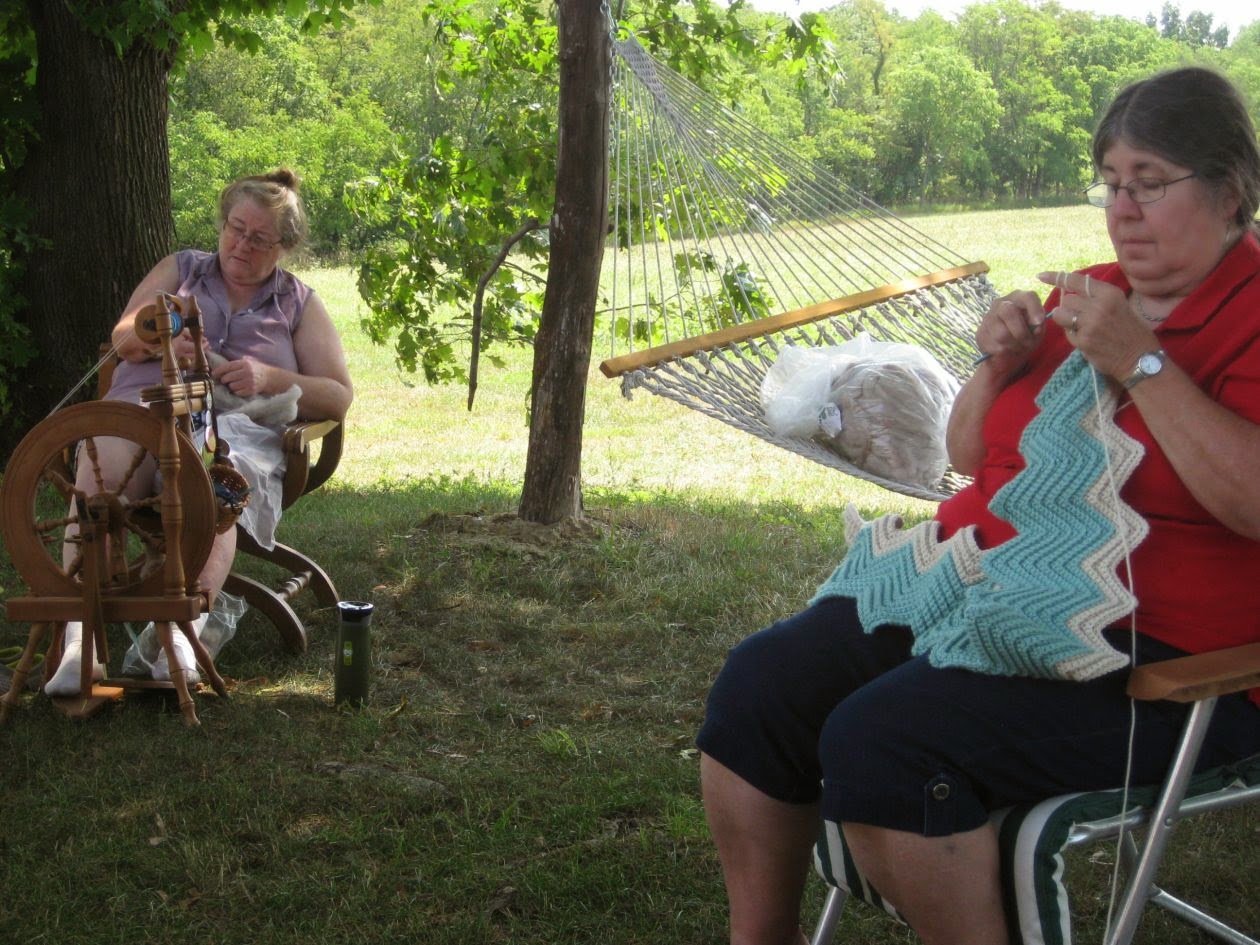 Their lovely vegetable garden and pond.  Oh no, I don't see a cornstalk anywhere! 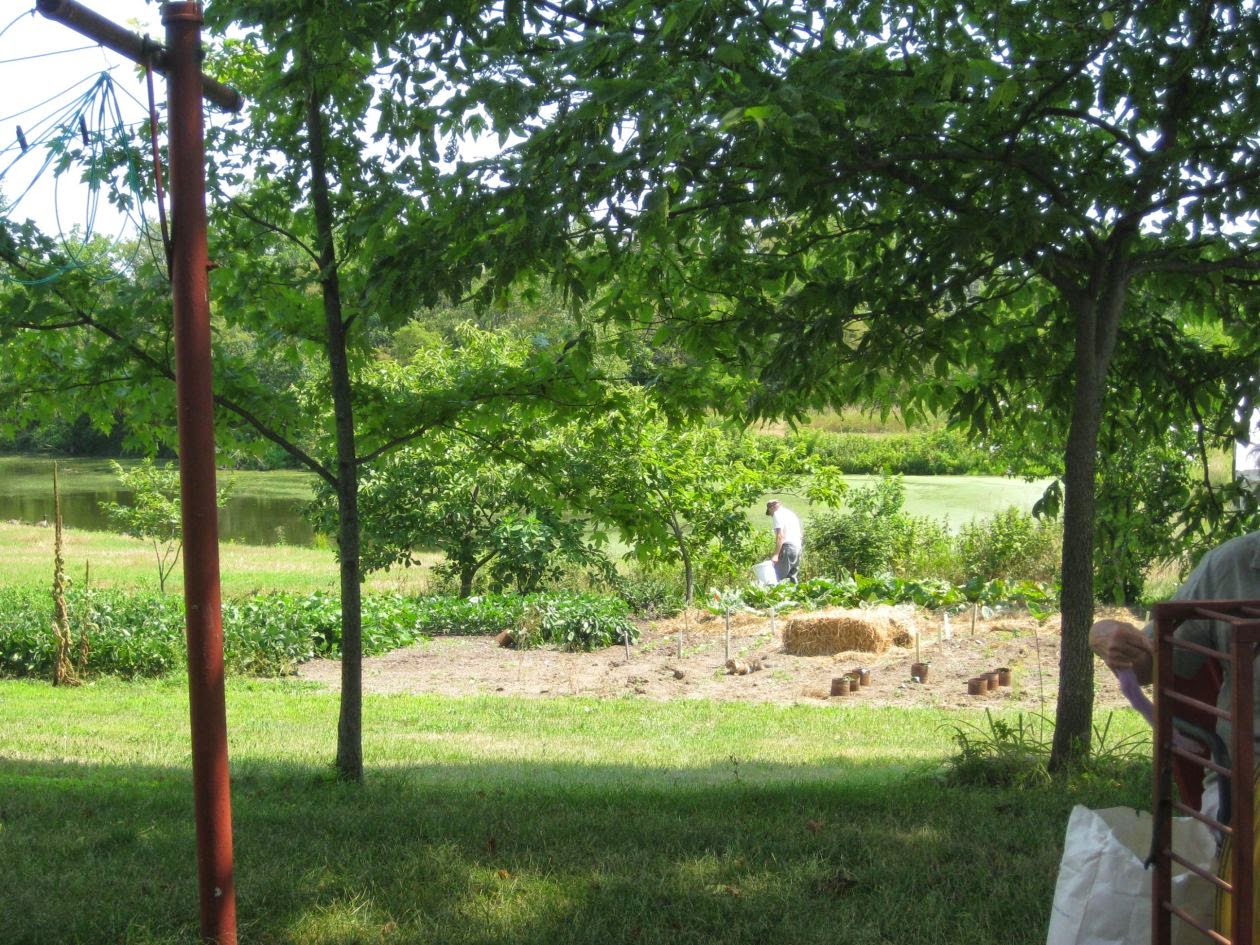 Thanks for stopping by and putting up with my foolishness.
And go out and get yourself some really yummy corn-on-the-cob!
Posted by weaverpat at 1:38 PM 4 comments:

This past weekend Hollabaugh's Orchard near Biglerville PA held their annual Peach Fest.

They featured alive band each day, lots of good food made with peaches, and a lovely selection of fruit and veggies for sale.

We went on Sunday to see a band called The Willys who were supposed to be bluegrass and classic rock.  They were heavier on the classic rock which was OK with me.  Zip kept mumbling that he thought he was going to be listening to bluegrass. 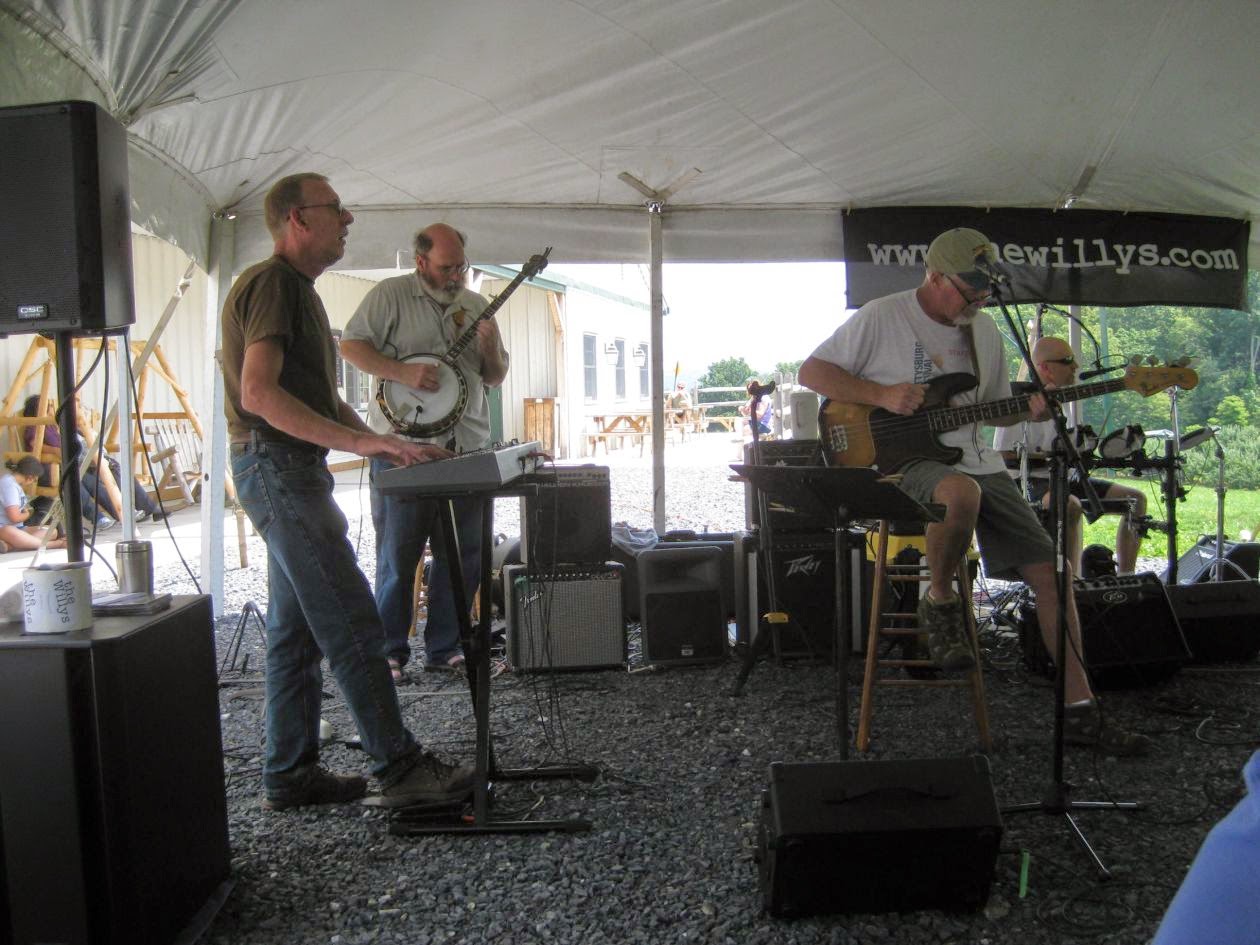 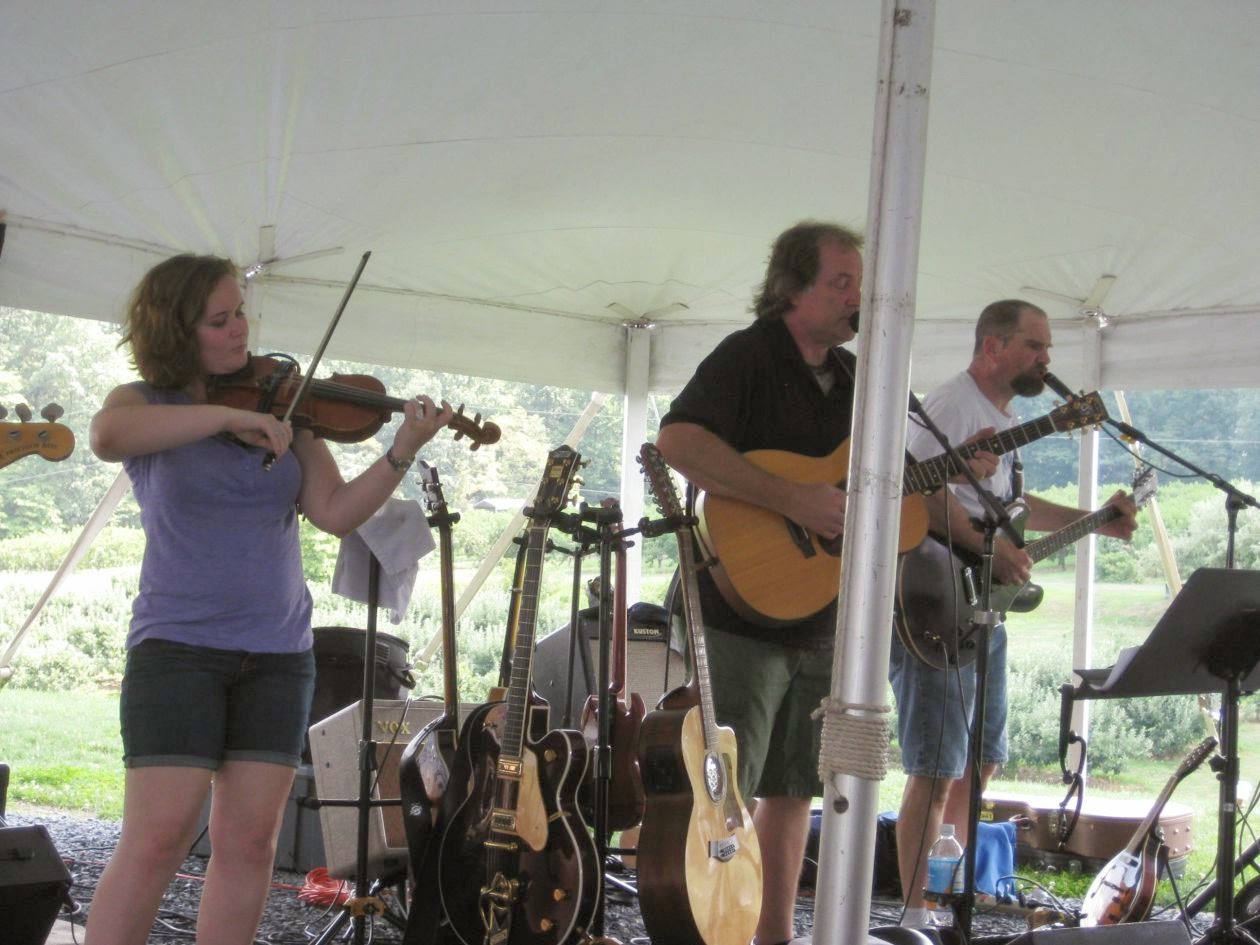 We had yummy fresh peach sundaes for lunch.  Somehow it got eaten before I even thought of taking a picture.

There were dozens of varieties of peaches to choose from.  These are the best of the crop. 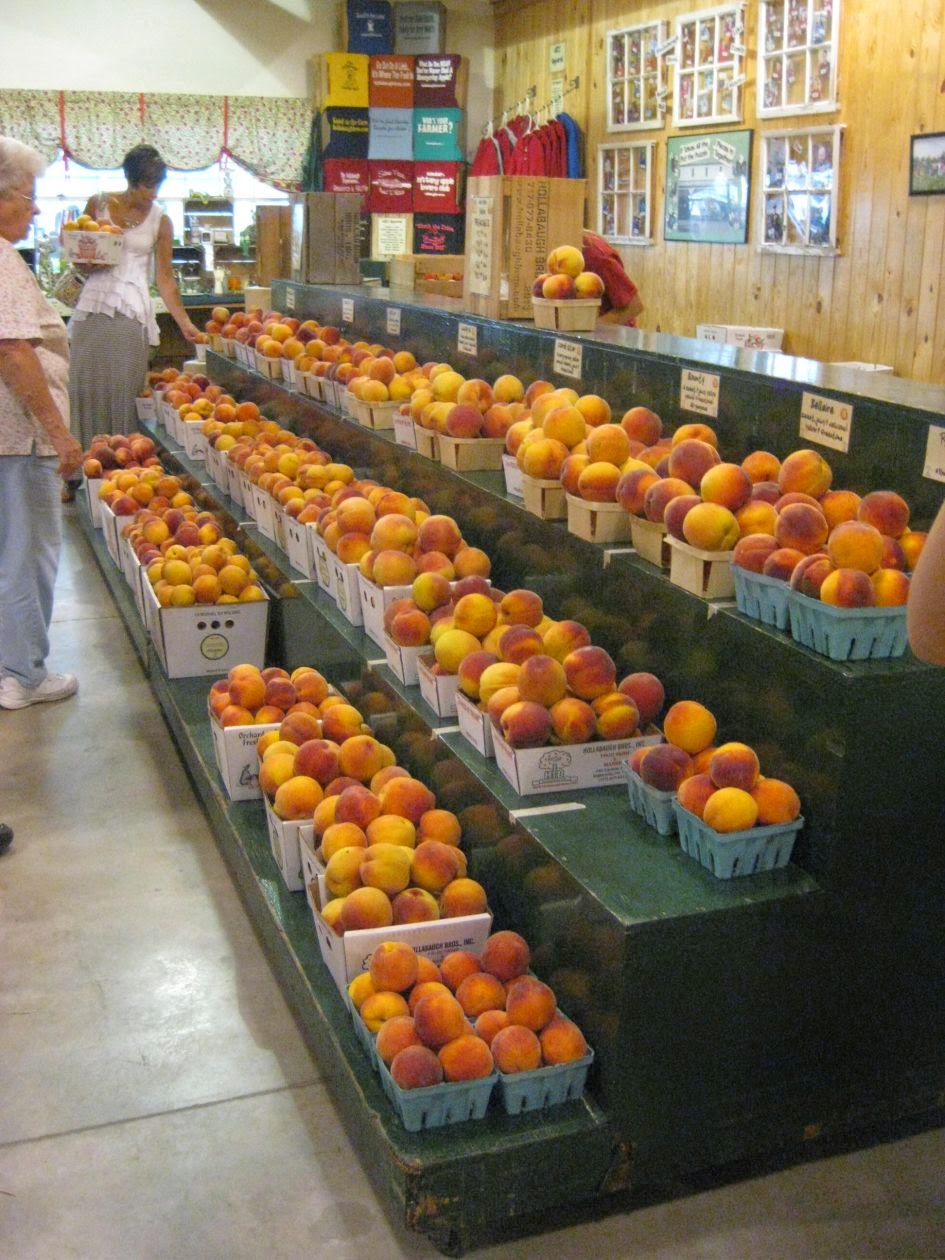 And then here are the bargain bins where I usually get my peaches.  There were so many people gathered around filling their bags that I had no desire to fight for my fruit.  Zip and I decided to go back another day through the week to make our purchases. 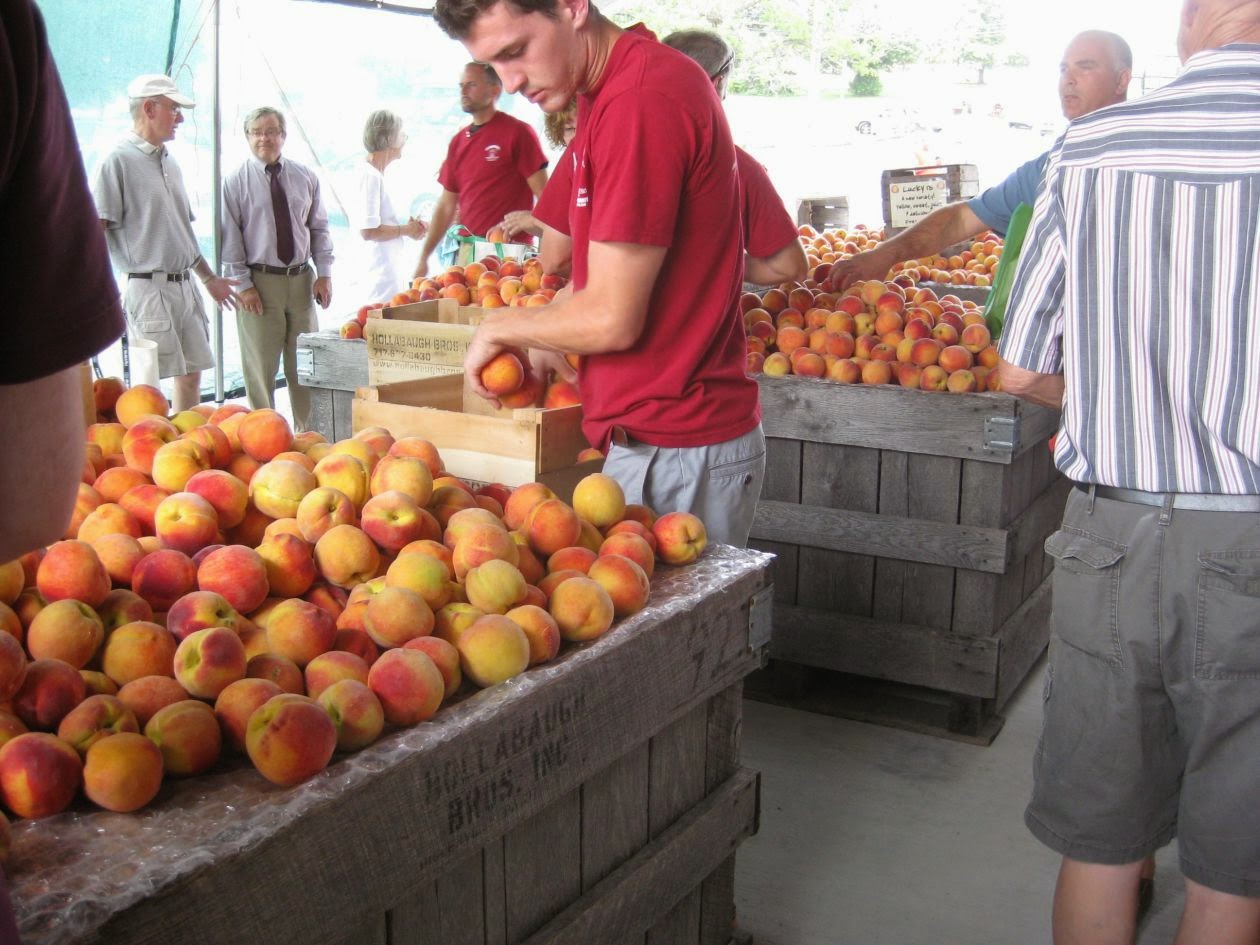 The baked goods made with fresh peaches really looked yummy.  There again, we decided to wait because the checkout lines were a mile long.  I really hated to pass up the kettle corn. 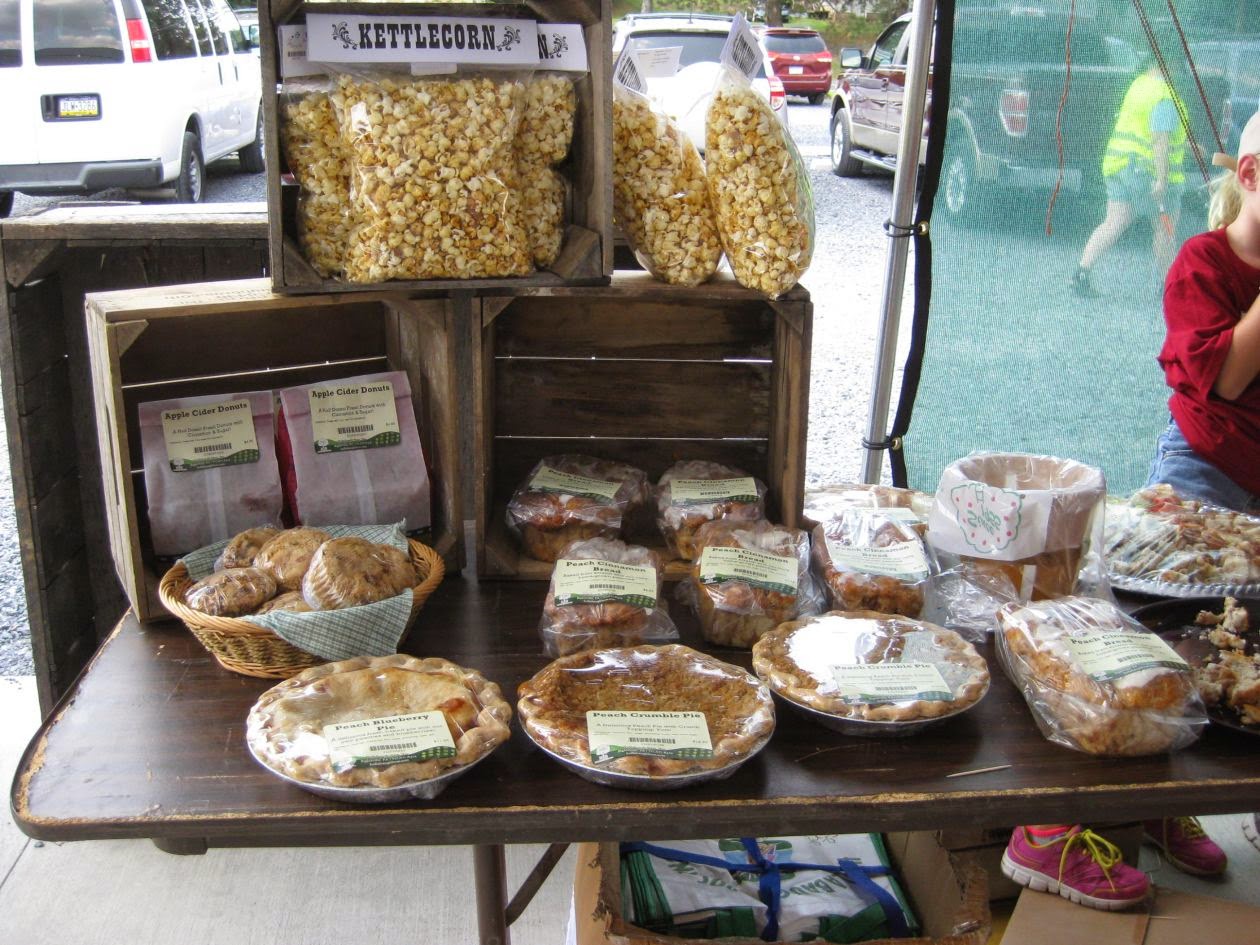 I don't know how I managed to get a shot of some produce bins without people in the way.  They had some lovely yellow watermelons. 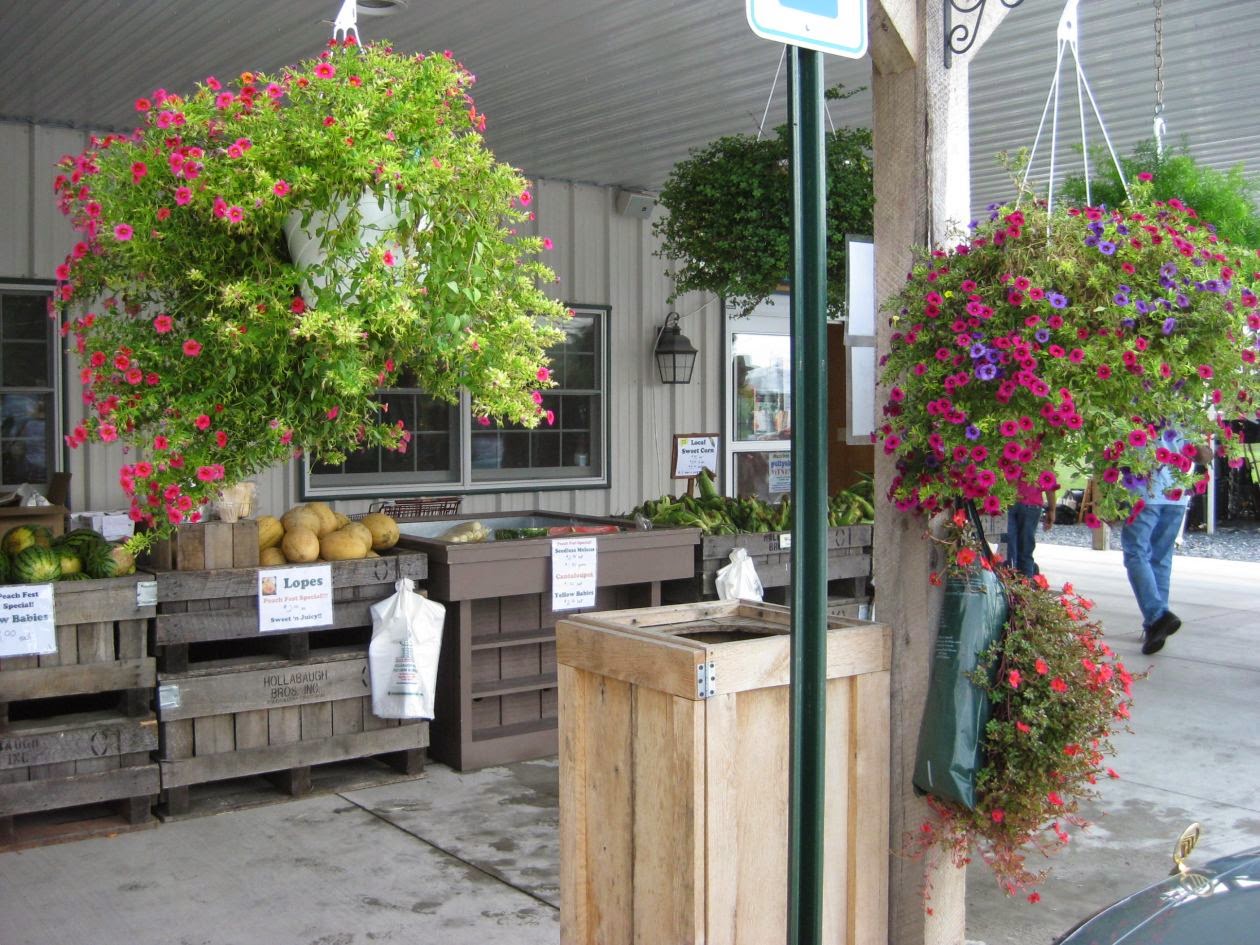 A visit to the orchard isn't complete without a view of the trees from which all these delicious peaches are harvested.   The trees in the foreground are apple and the ones up farther on the hill are the peaches. 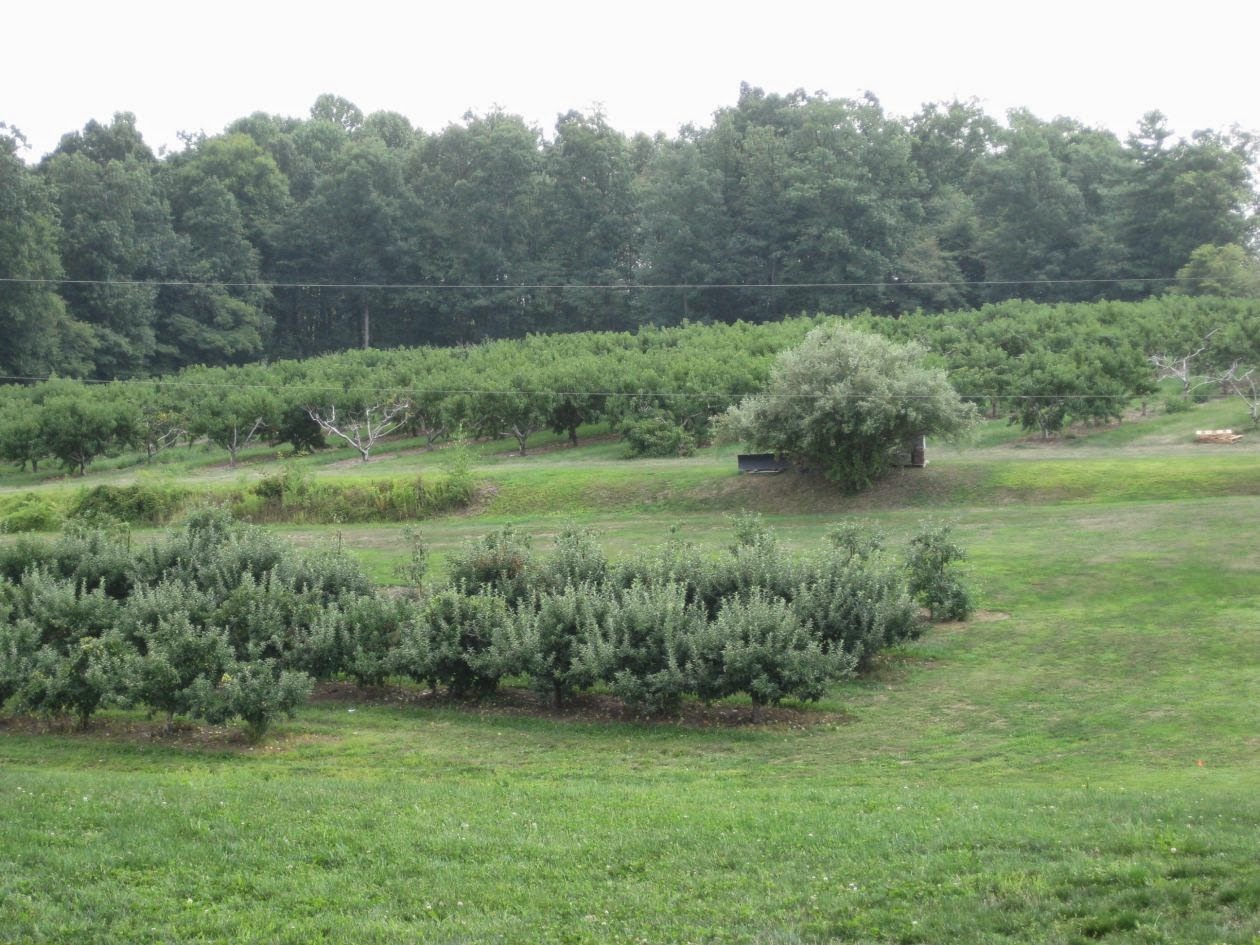 On the home front, work has slowed down on the addition.  Or maybe the changes just aren't as dramatic.  The basic wiring and plumbing is done.

The drywall being unloaded. 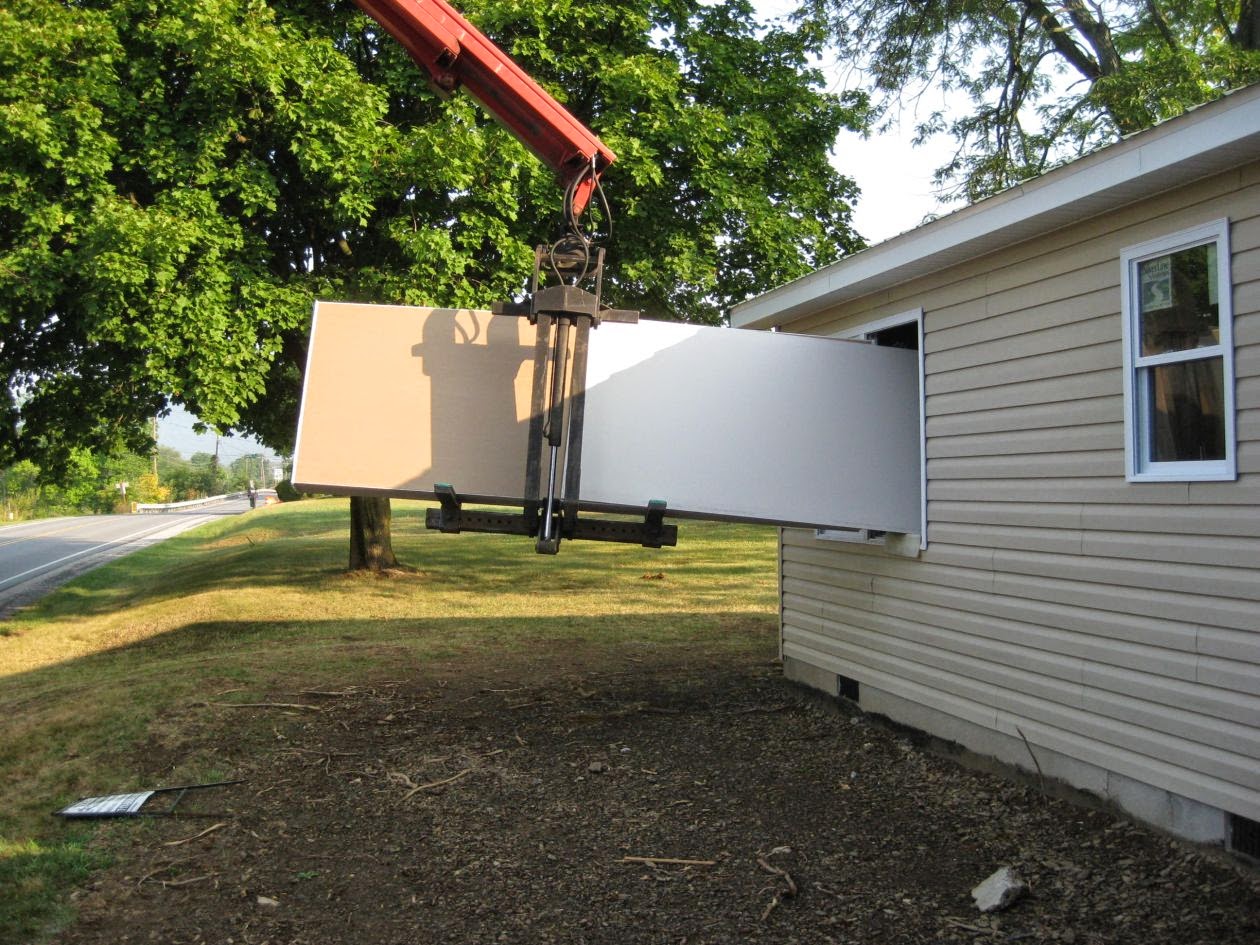 The French doors are installed. 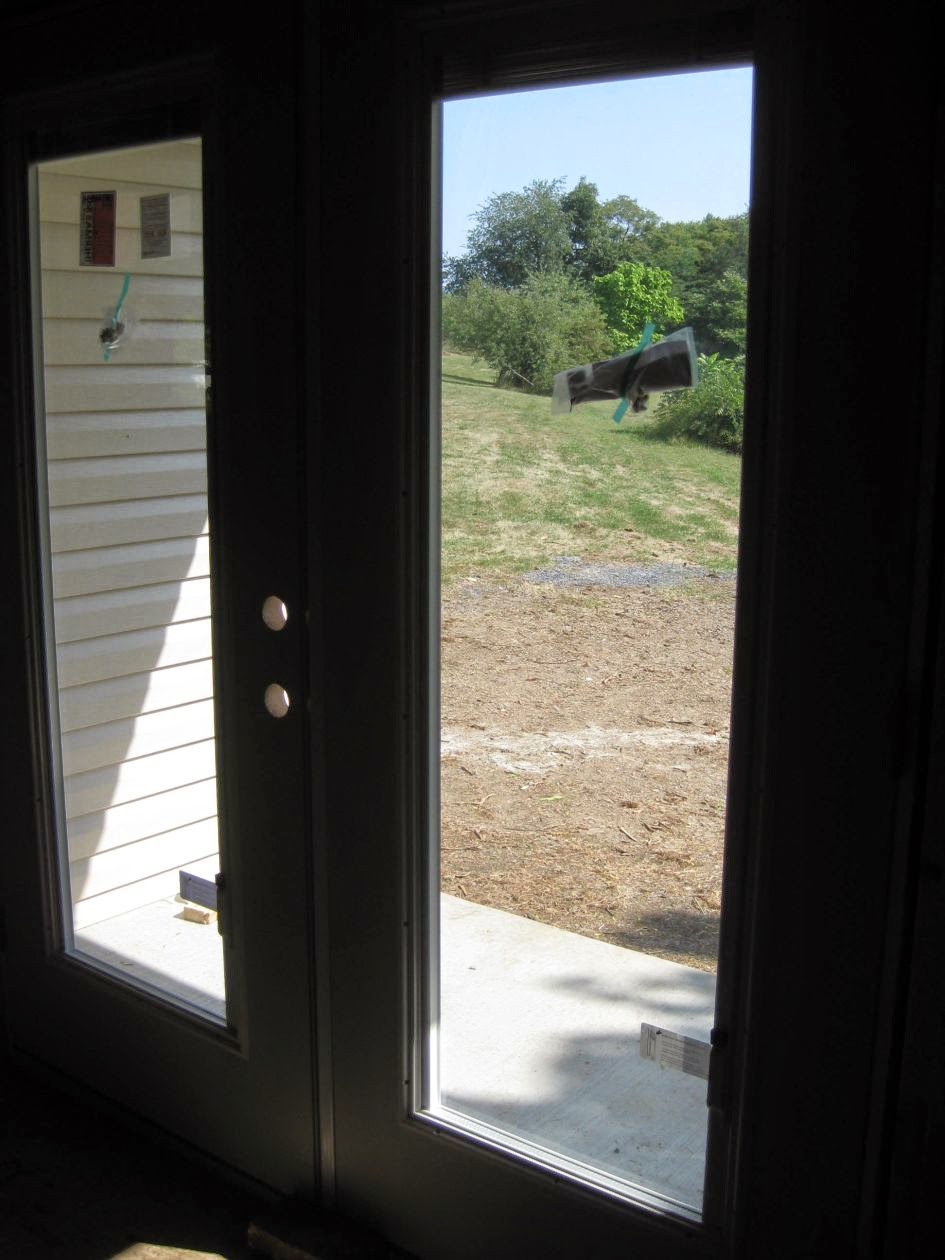 I don't know where along the walls we are going to have room for cupboards and dressers, there are so many electrical boxes all over the place.  Switch plates, thermostats, receptacles every six feet and the electric baseboard heat.  This is Zip's bedroom. 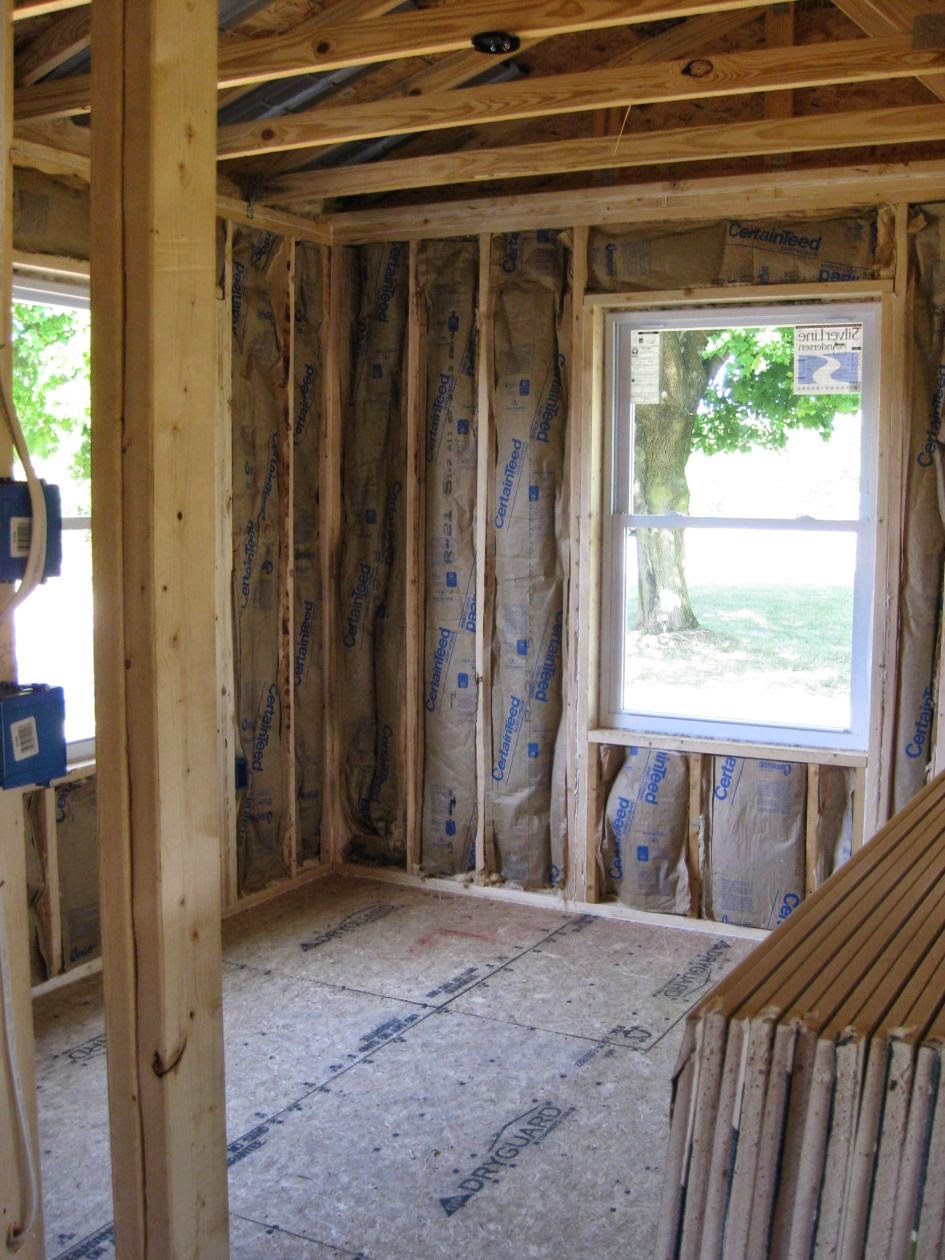 This is the laundry/storage area.  We are keeping the original outside wall with the wood siding and painting it to match. 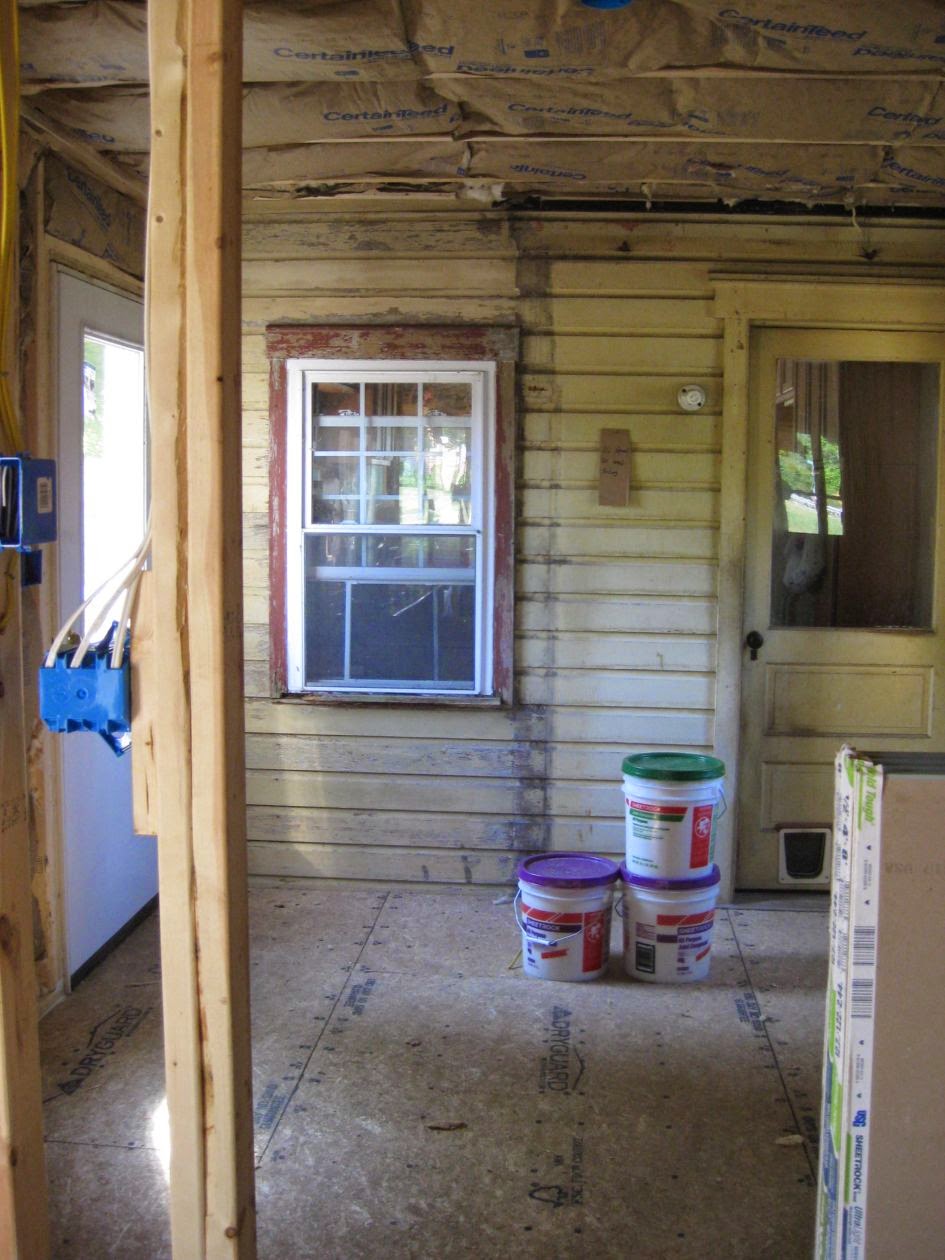 The drywall is now hung but still needs finishing.  The crew was supposed to come yesterday but didn't show up.  No sign of them today either.  Where are you, guys???

We are finally getting some much-needed rain.  It will be nice to see green grass instead of brown.
That's all for now.  Thanks for stopping by.