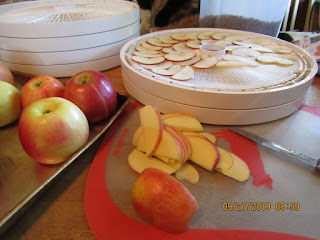 It's been a long few weeks.

We are trying to keep busy and not think too much about our loss.  It seems like we have so much more time on our hands.  I didn't realize how invested we were in Brad and Kami.  We didn't always spend a lot of time together, but they still took up a large part of our lives.

We are trying to get out and do a few things and not sit around the house dwelling on the sadness. It's apple season here in PA.  We enjoy driving down through Adams County and seeing all the trees loaded with fruit.  We visited our favorite orchard and came home with a nice variety bag of apples.

I'm going to tell you about a fire at our house the weekend after Thanksgiving last year.

Way back when we first bought our house, we didn't have enough money to build a separate chimney for the furnace.  So we put the furnace in front of the old kitchen fireplace because there was a hole there for a stovepipe.

So on that weekend our very old furnace decided to take a fit and coughed out some sparks and flame and caught the old mantel and the  wood around the fireplace on fire.  If it hadn't been for the quick action of Brad and Kami, the whole house would probably have burnt down.  I called 911 and then frantically tried to fill containers of water to rush to the kids to try to pour on the fire.  Zip was busy getting a cup of coffee.  What???  The house is on fire?  But I just woke up!  The fire was going up the wall and smoke was starting to come up through the rest of the house but he had to have a cup of coffee before he could make any fast moves.

Anyhow, the fire company arrived and with sirens and flashing lights.  They brought in the hoses, set up fans and opened all the doors and windows.  Zip and I were in a panic because we couldn't find the cats and the firemen would not let us look for them.  We had to get out!  By that time the fire was extinguished but there was still smoke in the house.  We prayed that the kitties would lay low and not panic and run outside.

Luckily when the smoke had cleared and the doors and windows were closed again, all the kitties were accounted for.  The only injury we had was that Penny had burn blisters on her paw pads.  We have no idea where she was that her feet had gotten burnt.

Then we had a two-week period when we had no heat in the main part of the house while the cleanup crew cleared out the smoke damage and the furnace installers did their work.

So what does this all have to do with getting apples?  My wonderful dehydrator fell victim of the smoke clean-up detail.  Also two looms, a lot of old musty yarn and many other treasures were hauled away.  It was a great way to get the cellar cleaned out but I don't recommend you try it.  I will say that our homeowner's insurance did an excellent job of finding clean-up people and restorers.  I am very grateful for their timely response.

So I bought myself a nice new dehydrator and went to work.  And luckily I had a supervisor, because I could not have done it on my own.  Thank you, Isabell!  I now have a nice bag of dried apple slices to snack on during the winter.  I also made a big pot of apple sauce that went into the freezer. 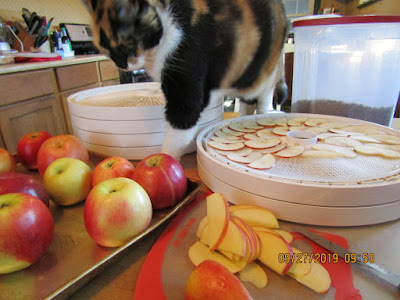 Yesterday I had to go to the podiatrist and have my toenail removed.  I've had a toenail fungus in my big toe for many years.  Mostly I just treat it with Vicks to keep it in check.  Lately I have been getting an ingrown toenail every few months.  The podiatrist decided that it was time to try removing the whole toenail.  I told her I wanted gas during the operation.  She laughed and said that was not something they did in the office.  So I had to settle for a few good shots of lidocaine.  It was a painless surgery until I got home and the numbing wore off.

Today I'm trying to take it easy.  Hobbling to the bathroom is about as far as I want to go.  Getting old is so much fun sometimes. 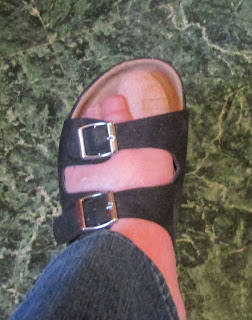 Brad and Dad several summers ago.
If you would like to read Brad's obituary, it can be found here,     https://www.duganfh.com/obituaries/Bradley-Wenger?obId=7348637&fbclid=IwAR1N2P--J9yeSnGNV5QBxskvy8p5b96Ttn1jcOanCFkAYQZWBQv2wrmspwU#/obituaryInfo 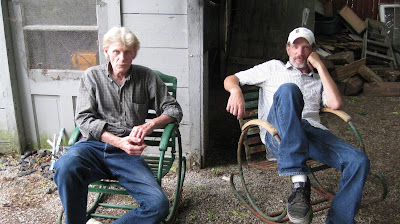 Posted by weaverpat at 8:29 PM